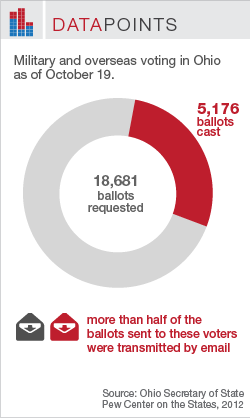 While Ohio has recently been in the news for a number of election-related issues, administration of the upcoming election marches on, including the important task of sending ballots to thousands of military and overseas voters.

The secretary of state’s website provides detailed, county-by-county data on the number of ballots sent to and received from these voters.

As of October 19, more than 18,600 military and overseas voters had requested ballots, and of those, nearly 5,200 had been cast. According to the secretary of state’s office, more than half of the ballots sent to these voters were transmitted by email.