The Marshall Islands is celebrating its first anniversary of being home to the world's largest shark sanctuary. It's an area of the central Pacific Ocean spanning 1,990,530 square kilometers (768,547 square miles)—nearly four times the landmass of California—in which commercial fishing of all sharks is prohibited. And not only is it the biggest, but its shark protections are also the strongest.

Recently the Pew Environment Group caught up with former Sen. Carlotta Leon Guerrero from Guam, who, as a regional leader on development and marine conservation issues, helped establish the shark sanctuary in 2011. She described the progress made to date and how the Marshall Islands is a model for countries interested in maintaining ocean health by protecting their top ocean predator. 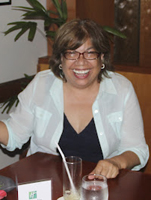 What do sharks mean to you as a Pacific Islander?

Guerrero: Sharks are the protectors in our stories and myths, but now it is our turn to protect them. As Pacific Islanders, we need to stand up to the huge fishing vessels from distant countries. The Asian luxury of shark fin soup, for which these sharks are senselessly killed, is just to show off. That is wrong, very wrong.

How can you tell that the shark sanctuary is working? Are there indications?

Guerrero: First of all, it is working because the people support it. All of the mayors and all of the senators in the entire country are united in their mission to save sharks. Also, over the past year, we have seen a number of high-profile seizures of illegal fins in the Marshall Islands. There have been successful prosecutions of four violations resulting in fines of more than $235,000 since the sanctuary was declared.

If fishing vessels are being fined for illegally possessing sharks, where does the funding go after it is collected?

What can other countries learn from the Marshall Islands shark sanctuary?

Guerrero: The Marshalls are showing us that it can be done. They created a strong policy, and now the government agencies are enforcing the law. Enforcement doesn't require creating a new agency for shark protection; it mostly requires some additional training for the conservation officers charged with implementing regulations for tuna, reefs, turtles, and whales. And if an additional officer or two are needed, the fines from the first violations can help offset those costs.