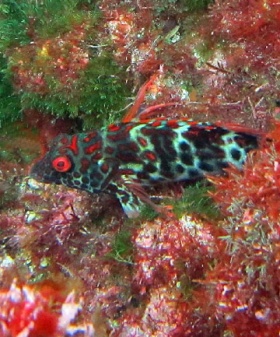 A splendid hawkfish in the waters around Raoul Island in the Kermadec Marine Reserve. Photo Samara Nicolas.

Instead of "schlepping New Zealand's ridiculous 100 per cent pure image around the world", Prime Minister John Key should wake up and join the fight to protect our oceans.

The results of the artists' South Pacific musings are now on display at Wellington's City Gallery, in an exhibition named after the navy's traditional sunrise call, which comes over the ship's Tannoy: "wakey, wakey, wakey . . . all hands . . . wakey, wakey, wakey".

The mantra has been commandeered to highlight our increasingly vexed relationship with its nautical natural capital.

"Wakey Wakey Wakey is calling on New Zealanders to wake up to the Kermadecs - it's a unique, awe-inspiring place that New Zealand is responsible for. We want more people to know about it and feel connected to it," Reynolds says.

In 1982 New Zealand hit the jackpot in the United Nations Law of the Sea negotiations. Our undersea territory ballooned to 15 times our land mass - to 4.3 million square kilometres - giving us the fifth largest economic exclusion zone (EEZ) in the world.

That vast territory includes the Kermadec arc - a fiery spine of more than 50 undersea volcanoes teeming with unique biodiversity that stretches along the second deepest ocean trench in the world from White Island in the Bay of Plenty to Raoul Island.

The region is a near-pristine oceanscape and home to at least 35 species of whale and dolphin, three of the seven turtle species in the world, 39 species of seabird, 88 crustacean species and countless other ocean dwellers.

"We went to the Kermadecs to be inspired by this pristine and virtually untouched oceanscape, and we came back with a whole new perspective on the region and what it means to New Zealand," Reynolds says.

"We came back understanding the unequivocal need to celebrate and protect our ocean, and more specifically, the Kermadecs."

He says the voyage affected all of the artists "in ways they never imagined."

Potentially rich in oil and minerals, the EEZ could make New Zealand the Saudi Arabia of the South Pacific, some say. Others, such as global conservation lobbyist the Pew Environmental Group, say we muct act now to protect the resource.

Pew's director of global ocean legacy New Zealand, Bronwen Golder, suspects the Government's attitude to establishing a proposed 620,000sqkm "fully no take, no mining, no fishing" Kermadec Ocean Sanctuary - or any other reserve where critical natural resources might be found - is that it would "send the wrong message" to investors and industry.

Ms Golder says New Zealand was once considered an international leader when it came to the environment.

In 1887, Tongariro National Park was the fourth national park created in the world. Today, there are more than 1800 fully protected national parks.

With the Marine Reserves Bill "languishing in select committees", protection of Antarctica's Ross Sea in diplomatic limbo and New Zealand's isolated "no" vote at the recent World Conservation Congress to further protect Maui and Hector dolphins, New Zealand is becoming out of step with global sentiment, Ms Golder says. "When it comes to the environment, New Zealand is increasingly missing in action."

"We are committed to ensuring our oceans and marine life are properly protected, but at the same time we are aware there are economic opportunities that have to be fully considered. The proposal will be considered in a way that gives proper weight to both these aspects."

Pew's Kermadec team has been in discussion with the Government, the fishing, mining, oil and gas and tourism industries, science agencies and the conservation lobby over the proposal.

It says there has been generally positive support for the sanctuary, except for the mining sector, which has concerns it would "lock away" mineral wealth. Apart from mineral and fisheries exploitation, Pew says the area is so isolated and so deep that few current activities would be affected by the sanctuary.

Although it agrees there could be "significant mineral potential" in the Kermadecs, Pew says the costs of mounting mining operations in the deep waters prone to tropical cyclones would be prohibitive. Added to that, the combination of mounting public concern and untested and undeveloped technology makes the Kermadecs an unattractive deep sea mining prospect.