Special notice: For the next month, ahead of the 2012 general election on November 6, Pew’s Election Data Dispatches will be posting three times a weekTuesdays, Wednesdays, and Thursdays—to keep our readers up to date on all the happenings in elections research and policy. Look for our bonus Wednesday posts now through November 7, and thanks for reading the Data Dispatches. 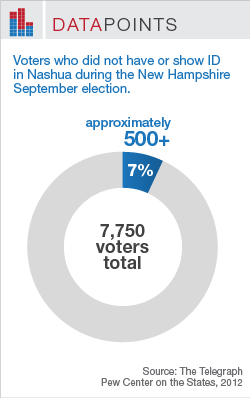 This past September, New Hampshire’s new voter identification law debuted during the state’s primary. The law requires voters to show a photo ID at the polls and is being rolled out in stages. During the primary, IDs were requested from voters, but they could still cast a ballot if they did not have one. This November, voters without the proper ID will have to sign an affidavit in order to cast a ballot.

In preparation for the November election, New Hampshire is collecting data on the number of voters without ID. The new ID law requires that the attorney general’s office contact each person who signed an affidavit after the election to verify his or her identity, and officials are using figures from the primary to estimate the number of voters they will need to reach.

For example, during the September election, approximately 7 percent of voters, or more than 500 of 7,750 people, did not have or show an ID in the city of Nashua, alone. Based on these numbers in Nashua and in light of the much higher turnout expected for of the November election, one estimate puts the number of voters statewide who could require such follow up after the presidential election at nearly 50,000.