An innovative project in the Gulf of Mexico may finally offer a real solution to a decades-old problem. 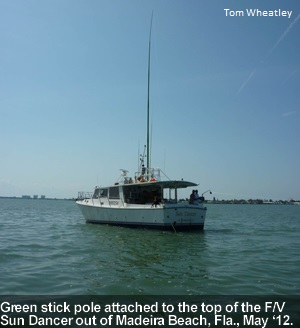 For 30 years, fisheries experts at the National Oceanic and Atmospheric Administration (NOAA) have tried to protect western Atlantic bluefin tuna from surface longlines in the Gulf of Mexico, the severely depleted fish's only known spawning area. Yet despite those efforts, this gear, intended to catch yellowfin tuna and swordfish, still threatens bluefin and other ocean wildlife.

But fishermen and scientists may finally have a solution to the problem. Since May 2012, they have been working together on a year-long pilot program to test greenstick gear and buoy gear (PDF), which are alternative fishing methods seen as potential replacements for surface longlines in the Gulf. Initial results indicate that the new gear is more effective at catching the targeted species and, even more important, the increasing catch rates for each successive trip suggest that the equipment can be made even more effective over time. If adopted throughout the Gulf, these more selective fishing methods could provide significant environmental and economic benefits to the region.

A greenstick is a 35- to 45-foot pole attached to the top of a boat that tows a 300- to 400-foot line. Up to 10 plastic squid baits hang from the line and skip across the water, mimicking real squid and flying fish, both common prey of yellowfin tuna. Once a fish is hooked, it's quickly brought to the boat.

Buoy gear, a relatively simple piece of fishing equipment developed for targeting swordfish, consists of a single piece of heavy fishing line attached to one or two hooks on one end and a buoy with a light on the other. Generally, one vessel will use 12 to 15 pieces of this free-floating gear. The buoys, which are deployed at night, drift in a straight line with the current. When a fish takes the bait, it drags a buoy out of line, indicating that it has been hooked. 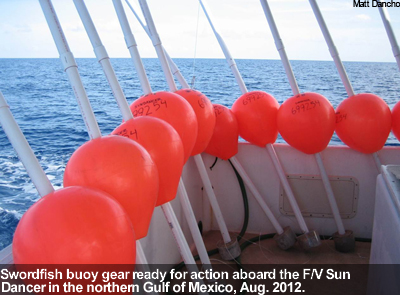 Surface longlines, by comparison, stretch for 30 miles on average and suspend approximately 750 baited hooks. These hooks are often left in the water for up to 18 hours and catch a wide variety of ocean wildlife, in addition to the targeted species.

Fishermen monitor greenstick gear and buoy gear and land fish quickly. If the catch is too small or not the right species, they quickly release it. This dramatically reduces the mortality of juveniles and any fish not kept for sale.

Researchers with the Oceanographic Center at Nova Southeastern University (NSU) in Dania Beach, Fla., are recruiting commercial fishermen in the Gulf to test greenstick fishing for yellowfin tuna and buoy gear fishing for swordfish. Two vessels from Florida are experimenting with the new equipment. A vessel fishing out of Louisiana is expected to start using the alternative gear later this month, and another Florida-based vessel is expected to join the project in October.

Fishermen who have worked with swordfish buoy gear and green sticks (PDF) in other areas (the Outer Banks of North Carolina and the Florida Straits) are training the new participants to help them become skilled with the equipment and methods, including adapting the gear to the Gulf fisheries.

NSU has also assembled several trained fisheries observers to collect data on the catch and economics of the alternative gear. This information will allow scientists and fishermen to analyze gear effectiveness in multiple locations and during different seasons. Researchers will use economic data collected by the observers to compare the income and expenses associated with surface longlines with those of the alternative gear.

Data from this pilot program could be especially timely, given that NOAA is reviewing the way it manages bluefin tuna fishing in U.S. waters. The agency is developing a new bluefin rule, which is expected in early 2014. It is seriously considering promoting the transition from surface longlines to greensticks and swordfish buoy gear and prohibiting the use of surface longlines year-round in the Gulf.

If greenstick and buoy gear in the Gulf perform as well as expected, NOAA could finally have a viable, practical, and economical alternative to surface longlines. Switching gear could finally halt the wasteful killing of ocean wildlife such as bluefin and sailfish, while ensuring profitable jobs for U.S. commercial fishermen and consumer access to American-caught seafood for decades to come—a win-win for all the communities that depend on a healthy and vibrant marine ecosystem in the Gulf.