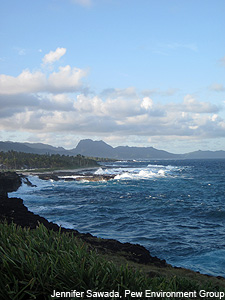 PAGO PAGO, American Samoa—Jill Hepp, director of global shark conservation for the Pew Environment Group, issued the following statement today in response to American Samoa's executive order that calls for a ban on shark fishing within three miles of the territory's coast, as well as a ban on the trade, possession, sale, and distribution of shark parts, including fins. American Samoa is the final U.S. territory in the Pacific to ban the trade of shark fins. The Northern Mariana Islands and Guam banned the practice in 2011.

“The Pew Environment Group applauds Governor Togiola T.A. Tulafono for this great step toward protecting sharks in American Samoa. We look forward to the formal establishment and implementation of these measures by his administration. We are encouraged that the Department of Marine and Wildlife Resources is currently considering amendments to its fishing regulations, and we hope these changes are adopted to make shark protections in American Samoa permanent.”