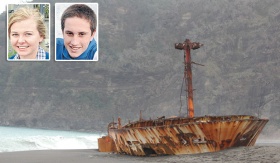 The shipwreck of Japanese trawler Kinei Maru at Denham Bay, Raoul Island. The wreck has been there since 1986, and two attempts to salvage it have been unsuccessful. This photo was taken during the Sir Peter Blake Trust Young Blake Expedition to the Kermadec Islands. Inset: Sophie Smith (left) and Nicholas Humphries.

The Kermadec Islands, located several hundred kilometres northeast of New Zealand, is the most remote conservation area managed by the Conservation Department. Home to dozens of species of endemic plants and birds, and a 745,000 hectare marine reserve - New Zealand's largest - it is a place few people get to experience. Kimberley Crayton-Brown spoke to two young Southland adventurers who have just returned from the trip of a lifetime.

For Fiordland College year 11 pupil Nicholas Humphries and Southland Girls' High School year 13 pupil Sophie Smith, a trip to one of the world's most pristine environments was always going to be exciting.

The pair boarded the HMNZS Canterbury on August 8, and, along with 28 other student adventurers, set off for the Kermadec Trench. They were chosen to be part of the first Young Blake Expedition, a 12-day trip to the remote area, accompanied by subject experts, scientists, artists, educators, communicators and leaders.

"The expedition has provided a chance for our most dynamic teenagers to experience a globally significant environment first-hand and contribute to scientific knowledge, all while developing confidence and leadership ability."

Sophie, who has had an interest in conservation from a young age, said one of the highlights of the trip was inspiring young children to take an interest in the environment with the LEARNZ team.

Schools can take virtual field trips using the LEARNZ site, experiencing diverse environments like the Kermadecs without leaving the classroom.

"We would blog back to the primary schools involved and have virtual conferences with them. It was so rewarding to talk back to primary schools about what we were doing. It was a really fun thing to do to know that we were inspiring other wee kids," she said. 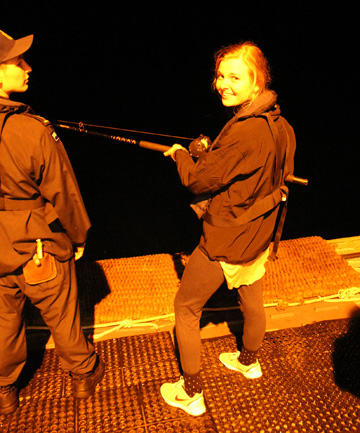 Southland Girls’ High School student Sophie Smith helps scientists with shark tagging off the back of the HMNZS Canterbury.

While attending Limehills Primary in 2005 Sophie took an interest in the endangered takahe. Discovering it did not have funding to support its protection like the kiwi and kakapo did, she approached Mitre 10 for help and they have been supporting the Conservation Department's Takahe Recovery programme ever since. She attended an environment youth leaders' conference in Norway in 2008, and her life had revolved around the environment ever since, she said. She felt incredibly privileged to have spent time with the different people and "awesome crew" on the expedition, with "amazing leaders" including businessman Mark Weldon, and creator of the Student Volunteer Army in Christchurch and 2012 Young New Zealander of the Year, Sam Johnson.

"Because the focus was Sir Peter Blake's 10-year anniversary we felt, as a group, really inspired that we were following in his footsteps."

The trip inspired her to understand the global significance of the Kermadecs, an area most New Zealanders were unaware of, she said. "As young leaders it is kind of like our role now to utilise the knowledge and skills we got on the trip to make people aware of places like the Kermadecs that are pristine . . . if we take action we can save places like that."

One of the world's most pristine places, the Kermadecs are incredibly significant as they have a huge range of endemic species, she said. "It is pretty much untouched and that is what is so important about it, and that it remains that way."

All but one of the islands are uninhabited, with Raoul Island staffed by DOC workers year-round. Landing permits from DOC are required to visit the island.

The area is significant for scientists and the work they do, some of which the student adventurers experienced first-hand, Sophie said. Shark tagging was "basically like going fishing off the back of the Navy ship", she said.

The group had a scientific research permit, which meant they could drop the lines down the back of the ship between 7.30pm and 9.30pm to catch the sharks. If the shark was big enough a small sample was taken from one of its fins.

Studying the sample could tell a scientist the life history of the shark, including who its parents were, she said.

If the sharks were the right size a "wee radar" was put in them so scientists could track them.

While the shark-tagging group mainly caught Galapagos sharks, one student caught an endemic species of shark which had only been caught four times before.

The shark was one of many endemic species spotted by the students while snorkelling in the waters of the Kermadecs.

"We saw lots of endemic wildlife. One thing about the Kermadecs is it's not about the quantity of life it's more about the quality."

For Nicholas, the highlight was walking into Denham Bay on Raoul Island.

After the students were taught what could not be taken on to the islands and completed quarantine checks on their gear, they were taken by Navy helicopter to the island to set up camp where they ate ration packs or "rat packs".

Hiking into Denham Bay was "definitely a different experience", he said. "I am used to tramping in Fiordland bush, it is different bush, different terrain. It was really cool. You didn't have to step over so many fallen trees."

While on the ship, with Mataura-raised Commander Sean Stewart at the helm, students could join the Navy crew's physical training. Woken at 6.50am with "all hands wakey wakey", Nicholas said it was pretty awesome getting into their routine.