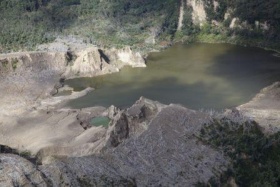 Green Lake fills the active part of the Raoul Island caldera. The last eruption, in 2006, deposited mud and killed trees around the lake. Photo Rebecca Priestley.

“Whales on the starboard bow,” was piped throughout the ship this morning. Rochelle Constantine, a marine mammal specialist from the University of Auckland, raced to the armory to get her biopsy gun and camera. Within 20 minutes she and Clinton Duffy were in the RHIB in pursuit of the whales.

From the bridge the Navy watch-keepers radioed instructions to Rochelle and her team. On the upper deck, the rest of us watched as a small group of humpback whales blew, fluked and rolled in the water, taunting the scientific team with their proximity but never letting them close enough to take a sample.

Rochelle is involved in a long-running international project aimed at understanding the endangered humpbacks of Oceania – one of only two endangered humpback populations in the world. In the nineteenth and twentieth centuries, more than 200,000 humpbacks were taken from the Southern Ocean.

But now the whales are protected and things are improving, but slowly. The staff on the island do an annual whale survey. For four hours, one day a year, they sit on the bluffs and look out to sea. Last year, they saw 126 whales.

This has got Rochelle really excited. “This is the southernmost location where these whales are near land before their long journey to their summer Antarctic feeding grounds,” she says. The humpback whales passing Raoul Island breed in Oceania and feed in Antarctica, but precisely where is not known. Rochelle’s long-term aim is to tag some of these whales to track their Pacific migration and find precisely where their breeding and feeding grounds are. This population of humpbacks is not recovering as fast as other populations of humpbacks and Rochelle hopes to link this to something in the environment where they feed.

On her second trip of the day, after a circumnavigation of the island, Rochelle and her team came across a pod of nine bottlenose dolphins, including one calf. They got one biopsy sample and lots of great photos of the dorsal fins – “we can tell each individual by the nicks on their dorsal fins,” says Rochelle.

Meanwhile, back on the island, the GNS Science and MetService teams are busy doing their annual checks and repairs of their monitoring equipment. Department of Conservation staff take monthly measurements of the temperature of the crater lake, monitor CO2 levels for Scripps Oceanographic Institute, and put up a daily weather balloon to monitor the winds in the upper atmosphere. There is also a tsunami gauge, an automatic weather station, a network of seismographs and a camera that transmits photographs of the caldera back to the Geonet network.

On the ship, there’s been more nighttime shark wrestling. Clinton Duffy now has two smoothhound sharks to take back to Auckland Museum to form the type series of this yet-to-be-described species, and fin samples from 17 Galapagos sharks and another five smoothhounds. Most of the Galapagos sharks were young, less than two-and-a-half feet (one meter) in length, but five of the largest sharks, from about 2.8 to 3.8 feet (114 to 151 meters) long, he tagged with streamer tags. Any reports of the sharks being recaught will give Clinton information about the range of the shark.

Clinton has his quota, so that’s it for the night fishing. Tonight we’re having a barbecue on the flight deck.