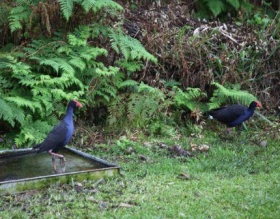 There’s always a few pukeko on the lawn in front of the hostel on Raoul Island.

Kermadec petrels (Pterodroma neglecta) and Kermadec white-faced storm petrels (Pelagodroma marina albiclunis) have been landing on the deck of the ship. These seabirds breed on Raoul Island and the nearby Meyer Islands, and plummet down from their cliff-side nests to feed in the ocean. With a diet of small squid, fish and krill, they are as much a part of the marine ecosystem as the large fish predators. Sometimes, though, the birds are prey. On his last trip to the Kermadecs, Clinton found three Kermadec little shearwaters (Puffinus assimilis kermadecensis) in the belly of a kingfish.

Clinton the shark man has a soft spot for birds, too, and each time a disoriented petrel is found on the ship he takes it to the upper deck of the HMNZS Canterbury – to mimic the cliffs they nest on – and encourages it to fly off.

We had our own flight yesterday morning. The wind was up and the swell had increased. It wasn’t safe to come ashore by boat so we flew to the island in the Navy Seasprite helicopter. 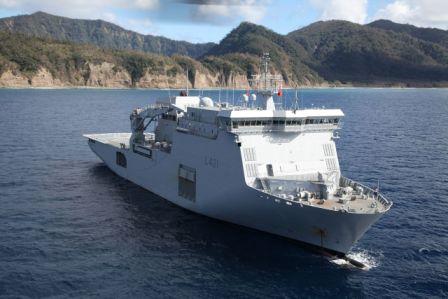 The HMNZS Canterbury at anchor next to Raoul Island.

Where we landed, on a grassy field, the grass and surrounding trees were filled with familiar looking land birds – pukeko, tui and kakariki. But they are different to the birds we know from New Zealand – the pukeko are skinnier, the tui are greener and the kakariki are fearless.

It’s very busy on the island. The new Department of Conservation team are learning the ropes and getting to know the island and its flora and fauna. The Geonet team is checking their monitoring equipment – seismographs, tsunami gauges and lake level monitors. The MetService team is repairing cyclone damage to the shed – locals call it the bomb shed – where Roulies fill the daily hydrogen balloon. 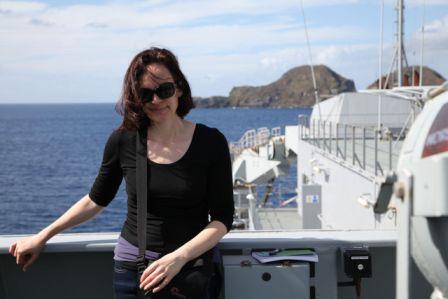 Many of the island’s nikau and pohutukawa were felled by the recent cyclone, and many of the standing trees suffered salt damage from sea spray. As well as occasional cyclones, the island is prone to volcanic eruptions, earthquakes and landslides. That’s enough for the birds to cope with without humans adding to the problem. Early visitors to these islands brought kiore (Pacific rat), the Norway rat, cats, pigs and goats. They’ve all been successfully eradicated and now the Department of Conservation is concentrating on eradicating exotic flora.

This island is only two million years old so all the native species here, on land and in the rocky reefs around the island, arrived by dispersal, from New Zealand, Australia or the Pacific Islands. We’ve been arguing about how the pukeko got here. We have them in New Zealand, but they can’t fly more than a few feet. Some people think they blew here on a big storm. Others think that visiting Maori voyagers brought them here in their waka (canoes). After last week’s excitement with the pumice, I think they came here on a raft of pumice.

Speaking of which, Helen Bostock found a line of pumice at the shoreline on Denham’s Bay. It was irregular in shape, which means it’s young, and she thinks it’s from last week’s “event”.

This article is repurposed from the Scientific American.