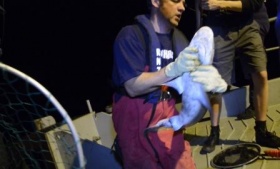 Clinton Duffy wrestling a Galapagos shark on the stern ramp of the HMNZS Canterbury.

Today, we circumnavigated the island in a RHIB, looking for dolphins and hoping for a few whale sightings. There was no sign of the little dolphin pod that greeted us the day we arrived and no whale signs but we’ll keep looking – people on Raoul island have been seeing whales every day.

In the evening, Clinton Duffy was back to fishing for Galapagos sharks (Carcharhinus galapagensis) from the stern ramp of the HMNZS Canterbury. This time he got lucky, and again, it was the Young Blake Expedition students on board who did the fish catching. The biggest of the three Galapagos sharks caught last night was 4 foot (1.2 meters) long and involved a fishing line, a net and a bit of shark wrestling from Clinton. 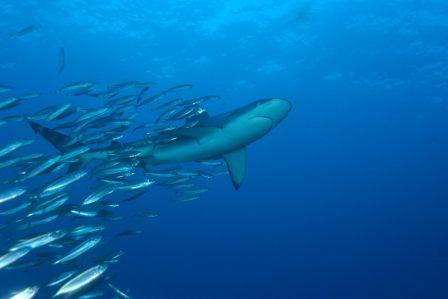 Once he had the shark on its back on the ramp, his team got to work measuring its length, determining its gender, and clipping off a small piece of the pelvic fin. Then, only a few minutes after it was caught, the shark was released back into the water to carry on its work as top predator.

Clinton has spent a lot of time diving with sharks and observing their behavior – “a shark patrolling the reef, doing its thing, is a thing of absolute beauty,” he says – but on this expedition, he’s after their DNA.

“I’ll use these samples, and others from Norfolk Island, to investigate regional genetic population structure – which should give us an indication of how isolated or connected the Kermadec sharks are to those in similar habitats in the Tasman and Coral Seas.” To complete his project on population genetics, he needs fin samples from 30 of the Kermadecs Galapagos sharks. He has 19 samples from a biodiscovery expedition to the Kermadecs last year, and now three from last night, so only eight to go.

Galapagos sharks are generally found in tropical to subtropical waters around oceanic islands and seamounts. “As far as we know, the Kermadec population is the only New Zealand population of this species,” says Clinton. The range of the adult sharks, which reach 12 feet (3.6 meters) in length, extends far beyond the 12 nautical mile extent of the marine reserve, into areas between the islands where long-line fishing goes on.

“I would like to see the entire archipelago protected,” says Clinton. “It’s likely these Galapagos sharks are moving between the islands.”