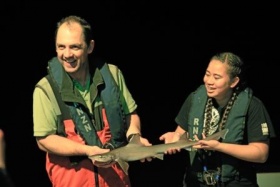 Clinton Duffy and Melania Napa’a with the Kermadecs smoothhound – an undescribed species and only the fifth specimen known to science. Photo: Bruce Foster

What was I saying about science and serendipity? On Thursday we had an unexpected haul of pumice fresh from an underwater volcanic eruption. Last night we went fishing for Galapagos sharks and found something better.

Clinton Duffy, Department of Conservation shark biologist, is here to study Galapagos sharks, one of the top predators in the Kermadecs. Once it was dark outside, we lowered the stern ramp to water level, turned on the floodlights and threw a berley bag – a mesh bag filled with minced pilchards – into the inky blackness.

Dressed in red overalls and a life jacket, Clinton grabbed a fishing rod, put a shiny lure on the line, and cast into the ocean. Other scientists, Navy ratings and students soon joined in, taking turns at holding the fishing rods, cutting up squid to throw into the sea, or standing by with a net. 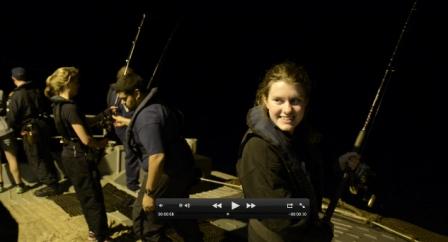 Night fishing off the stern ramp of the HNZMS Canterbury. Photo: Bruce Foster

Finally, at 9pm, a shark. Melania Napa’a, a student from Sir Edmond Hillary Collegiate School in Otara, reeled in a small brown shark about 32 inches (80 cm) long, with black tips on its dorsal fins, white margins on its other fins, and tiny white spots all over it. It was not a Galapagos shark but we could tell by the look on Clinton’s face that it was something pretty special.

Melania had hooked a smoothhound (also called a spotted dogfish, or rig shark). While there are many species of smoothhound around the world, the one that lives in the Kermadecs is a separate and undescribed species. Clinton, who says this is only the fifth specimen known to science and the first live one he has ever seen, has been working on a full taxonomic description of the fish.

Back in Auckland, he will take DNA samples, x-rays and more than 100 measurements. The shark will be kept at Auckland Museum where it will become part of the type specimen for the species.

Clinton says this new species, like the Kermadec spiny dogfish he recently described, is confined to the northern part of the Kermadec Ridge. “This part of the ridge dips very deeply, and prevents dispersal by shelf species – everything from microorganisms to big fish,” he says. “The Kermadecs really are a center of endemism.”

But back to the pumice. The engineering crew checked the ship’s water filters yesterday and, along with the usual mess of leaves and seaweed, they found a lot of small pieces of pumice. These filters, which suck in water to cool the ship’s engine, are about 10 feet below the sea surface, so when the ship went through the pumice raft on Thursday night it sucked up a lot of pumice with its water. Today, they’re giving the water filters a thorough clean. Helen Bostock has a new collection of pumice to take back to her lab in Wellington and I have a couple of small souvenirs to take home.