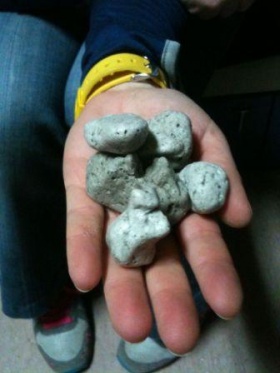 I went outside at first light and found the ship in the middle of a heaving grey sea, with nothing but ocean and sky in every direction. Three dark-winged birds – probably petrels – swooped and dived amongst the waves. It might look like a great big nothingness, but there’s a lot going on in the ocean beneath us. The birds are diving for fish or small squid. There are whales migrating south as we sail north. There are volcanoes in the depths beneath us, their slopes and geothermal vents home to a rich and often bizarre diversity of flora and fauna.

Then, at midday, our Commanding Officer, Commander Sean Stewart, gave the order to change course. A marine patrol aircraft, flying from Samoa to New Zealand, had spotted “an event” in the ocean north of us. Up to 250 nautical miles long by 30 nautical miles wide, it stood out against the blue-grey of the ocean as a great white froth on the surface of the sea.

Marine geologist Helen Bostock said the deposit could be a mixture of ash and pumice from an underwater volcanic eruption. There was only one way to find out – sample it. By the time we reached the deposit, the ash had dispersed, but blocks of pumice were bobbing past us in the water. 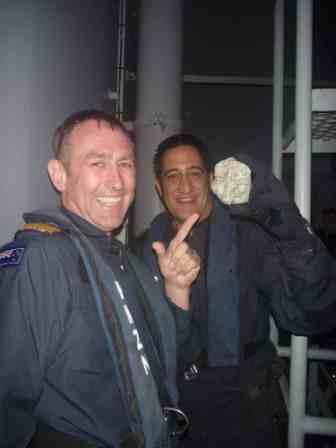 Sometimes science is about using whatever tools you can find when faced with a serendipitous opportunity. At Helen’s request, a couple of young Navy ratings lowered buckets, tied to a rope, off the gun deck and down into the water. There was a big cheer when they came up with a few small pieces of pumice – brand-new, freshly-minted rock – in the bucket.

But from where? We have some people on board from Geonet, whose role is to monitor seismic and volcanic activity around New Zealand. They say that Monowai, an undersea volcano north of Raoul Island, has been showing activity for the past five days. 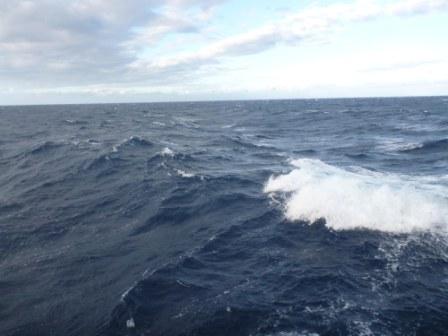 Waters off the southern end of the Kermadec Ridge. The world’s longest underwater volcanic arc is found in these waters. Credit: Amelia Connell

Helen says that when she gets the pumice back to her NIWA [National Institute of Water and Atmospheric Research] laboratory, they will do a chemical analysis. “It’s like genetic fingerprinting,” she says. “Each volcano has it’s own chemical signature”. If this pumice matches Monowai, or one of the other existing volcanoes, that’s where it’s from. If it doesn’t match anything, it could be from a new volcano.

While we were outside pumice spotting we saw more petrels and an Antipodean albatross. And then, at last, a whale! Not a humpback, which are known to follow this path on the annual migration from the tropics to their Antarctic feeding grounds, but a minke whale.

We’re now sailing at about 17 knots, and should reach Raoul Island overnight. We’re all hoping for calmer seas.