Earlier this year, the Pew Center on the States released Democracy from Afar which showed the progress states have made in passing laws to better protect the voting rights of military and overseas voters.

Much of this progress has stemmed from the passage of the federal Military and Overseas Voter Empowerment (MOVE) Act, passed in 2009, which focused on making key changes to federal elections such as mandating electronic transmission of blank ballots to military and overseas voters and requiring ballots be sent out at least 45 days before an election. However, the MOVE Act did not apply to state and local elections. To address this, in July 2010 the Uniform Law Commission, an organization established to help states standardize and streamline their laws, adopted the Uniform Military and Overseas Voters Act (UMOVA), a model law to implement the federal requirements and additional protections for military and overseas voters to state and local elections. 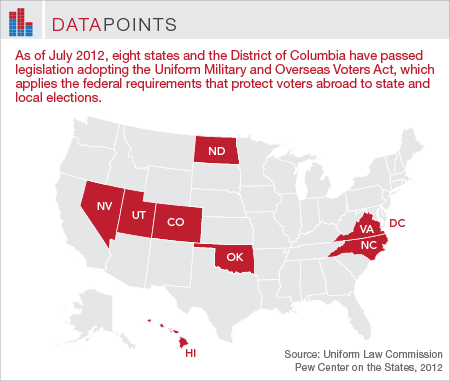 Now two more states – Hawaii and Virginia – as well as the District of Columbia have passed this legislation, and it has been introduced in four more states. As previous dispatches have noted, military and overseas voters still face many challenges when casting ballots. However, as more and more states pass these laws, voters abroad are better situated to cast ballots than ever before.