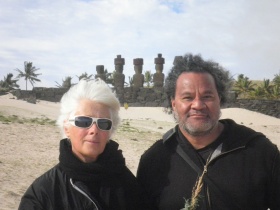 Eternal watchers: Artists Robin White and John Pule in front of the famous moai on remote Easter Island, while part of a contingent of Kiwi artists and writers there for the opening of the travelling exhibition 'Kermadec - nine artists in the South Pacific'.

Wellington poet and art curator Gregory O'Brien writes from Easter Island, where he helped install the 'Kermadec—Nine artists in the South Pacific' exhibition in the school hall at Hanga Roa.

A major exhibition of contemporary art on any Pacific Island is a rare and unexpected event, but even more so on Easter Island, which also happens to be the most remote human settlement on the planet. How might a show of contemporary paintings, photographs and sculptures be received in a place so emphatically associated with the distant past—in particular with its famous stone statues, or 'moai'?

On an island where nearly all visitors are tourists, intent on taking home digital picture-files and souvenirs, the fact we had brought something for the local people--an exhibition--was greeted with surprise, initially, then with gratitude and enthusiasm. The ocean-focussed exhibition also led to some impassioned discussion about the use and abuse of the Pacific.

Among those accompanying the exhibition were artists Robin White, John Pule, Bruce Foster and Reuben Friend (artist and City Gallery Wellington curator). With over 100 people present, the exhibition opened with speeches, a blessing from the parish priest and a traditional Rapa Nui welcome. There was much drumming, dancing and, at the appropriate moment, a cooked chicken was extracted from the smoking soil in front of the hall. (Said chicken was then ceremonially presented to the visitors--each had to tear off a piece and eat.) At the end of formalities, everyone flooded into the gallery.

The 'Kermadec' exhibition was first shown two months ago at the New Zealand High Commission in Nuku'alofa, Tonga, where it reached an audience of thousands. A larger version of the exhibition was shown in Tauranga and Auckland earlier this year and will be opening at City Gallery Wellington in October. On the back of these successes, the sponsors of the project, the Pew Environment Group Kermadec Initiative, decided that the exhibition would be a perfect vehicle for generating discussion about oceanic conservation on Easter Island, where their Pew colleagues were in discussion with the peoples of Rapa Nui and the Chilean Government about marine conservation in the region.

While on the island, the artists visited some of the 800 or so stone 'moai'. Robin White made finger-paintings using volcanic soil, as well as images with a pin-hole camera. Pule wrote poems while sitting beside the ocean which 'shapes the stones into face that stare wearily at the sky'.

It was a thrill and an inspiration to stand on a crumb of land in the middle of the world's largest ocean and, staring out to sea, observe the curvature of the planet. Yet it was also sobering to see that even here the impact of humanity on the environment was everywhere manifest.  At the historically significant Anakena Beach, particles of blue and white plastic permeate the golden sand. One morning at Tongariki, on a rocky outcrop only a few metres from the largest and best-known group of the island's ancient statues, we encountered a woman, Piru Huke, who told us she had been collecting rubbish along that coast every day for  the past 25 years.

Amidst the morning's salvage were ropes, buckets, bags, nets and plastic bins (two of which, we were ashamed to notice, had 'Property of Sanfords, South Island NZ' stamped on them). She told us she was making an art work as a counterpart to the work of the New Zealand contingent. Later that day she placed her 'installation', a few truckloads of this flotsam (all of which had been gathered over the past few days), in the schoolyard behind the exhibition hall. To further underline the point that all oceans are one ocean—and all parts of the ocean are connected--she erected a placard denoting all the countries where this refuse had come from, Aotearoa included.

All manner of people have visited the exhibition since then: tourists, Chilean naval officers, children, the Mayor of Rapa Nui, the parish priest, fishermen and local artists.  The people recognised the energy and oceanic character of the work—they connect with Pule's assemblages of history and myth and with Robin White's large tapa works (Easter Island has its own tradition of tapa-production). The visitors' book is still gathering enthusiastic remarks—in Spanish, Rapa Nui and occasionally in English. Each day local women tend the sumptuous plant-arrangements that grace the hall, inside and out. Beneath Elizabeth Thomson's 'rosette' wall-sculptures, a local girl has left the most exquisitely constructed bird's nest. If you look closer, however, you will find the nest is largely made from cigarette butts and other human detritus--as if to reiterate the vulnerability of any ecosystem.

With local children, the artists pitched in and painted a mural outside the hall—a celebration of ocean and island life—as well as two smaller friezes inside the hall. Alongside a flying fish, painted by White, a lizard by Reuben Friend and an oceanic dragon-spirit by John Pule, I inscribed a short poem:

My stone head
Your earthly body
Our ocean

While the stone heads of Easter Island  are famous for facing away from the sea, humanity needs to look  intensely and imaginatively the other way—towards the sea—to acknowledge the importance of the ocean and to see how humanity fits within that scheme of things. That was the theme of the 'Kermadec' voyage a year ago, and it was a message that is presently echoing loud and clear on the far side of the Pacific Ocean, just as it is in the minds of many New Zealanders. 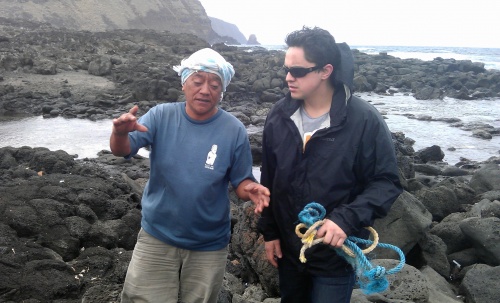