Holly Binns, director of Pew's Southeast and U.S. Caribbean Fish Conservation campaigns, is my guest author today. She is going to provide some important information regarding the recreational fishing of red snapper. 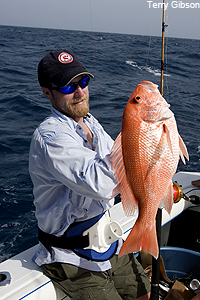 Recreational fishermen heading to the Gulf of Mexico face a conundrum if they want to hook a red snapper.

Fishery managers have increased the total weight that can be caught legally because the depleted species is rebounding after decades of severe overfishing. Indeed anglers report encountering scores of these fish. While this would normally sound like good news, anglers are allowed to catch fewer fish now, so despite the increase in total allowable recreational catch – from 3,530,000 pounds in 2010 to 3,959,000 pounds in 2012—those figures represent fewer fish because red snapper are larger.

It's a catch-22 situation that sometimes develops as depleted species recover. In this case, red snappers are growing significantly heavier—an important indication of improved health. In 2011, the average red snapper weighed 6.39 pounds, almost double the 3.32 pounds in 2007 before a recovery plan went into effect. And that weight gain has put fishermen on a diet of sorts.

Now, an additional complicating factor: The fish are dispersing over a wider area of the Gulf, so more fishermen are able to catch them and they're meeting the quota faster.

As if that's not complex enough, consider one more detail. If fishermen exceed the quota in one year, managers adjust the length of the recreational fishing season the following year to keep the catch from going over the quota again. That generally means an even shorter season - and this year's recreational fishing season, from June 1 to July 17, is the shortest ever. The 46-day season in 2012 is partly due to last year's breach of the limit. It's been a pattern for much of the past several years.

Recovery plans take time and patience, and there are bumps along the road. That's why it's best to prevent overfishing in the first place.-Holly Binns, Director, Southeast and U.S. Caribbean Fish Conservation Campaigns

Fortunately, this is not an endless spiral. First, managers are exploring several new approaches to keep better tabs on the amount of fish caught so next year's season is not cut short due to excess catch from this one. The goal is to keep the rebuilding plan on track and also allow for more fishing opportunities. Second, the red snapper population isn't expected to continue gaining weight as fast as it has recently. Similar to children, these fish may have growth spurts, but they eventually level out. And if the population continues to rebuild as planned, fishery managers expect to increase allowable catch each year. Eventually that will mean more individual, not just heavier, fish to go around.

A study to be completed in May 2013 is expected to provide an updated look at the progress red snapper in the Gulf have made toward rebuilding to healthy levels. The most recent data show they are at about 30 percent of their target level. To continue the recovery, the fish must grow larger and older to reach their most productive spawning years. A single 24-inch red snapper can produce as many eggs as approximately 212 fish that are 17 inches.

Since the rebuilding plan went into effect in 2008, a population that consisted mostly of 2- and 3-year-old red snapper is now typically made up of 5- to 7-year-olds, with a larger number of red snapper reaching 10 or more years.

Recovery plans take time and patience, and there are bumps along the road. That's why it's best to prevent overfishing in the first place. An ounce of prevention is worth more pounds of fish.