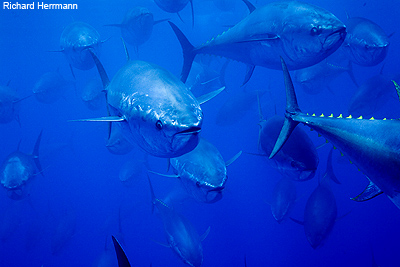 In the Gulf of Mexico, surface longlines intended to catch yellowfin tuna and swordfish indiscriminately catch and kill more than 80 other species of ocean wildlife, including severely depleted western Atlantic bluefin tuna. This species is particularly at risk: Scientific studies have identified it as a distinct population (as compared to eastern Atlantic bluefin) that reproduces only in the Gulf. For decades, the U.S. government has tried to restore this bluefin tuna stock. But regulations such as seasonal hook modifications and restrictions on the use of live bait have failed to sufficiently protect bluefin and other species from wasteful longline fishing. The Deepwater Horizon oil spill in 2010 further exacerbated the decades-old problem caused by surface longlines when it contaminated approximately 20 percent of the bluefin spawning habitat during the peak reproductive season.

We may finally have a reason to be optimistic about the fate of western Atlantic bluefin tuna, however. After years of ineffective management in the United States, the National Oceanic and Atmospheric Administration (NOAA) is considering sweeping changes to the way it manages this species in the Gulf of Mexico and Atlantic Ocean. But the agency needs to hear from you. Without a strong public push for increased conservation measures, recovery of bluefin tuna could be stalled for years and cost the United States great fishing opportunities and healthier oceans.

Now is the time for anglers, artisanal commercial fishermen, conservationists, and other ocean enthusiasts who understand the importance of these great fish to get involved.Lee Crockett, Director of U.S. Ocean Conservation, The Pew Charitable Trusts

The collective efforts of environmentalists and fishermen have led NOAA Fisheries to finally recognize the need to adequately protect bluefin tuna in the Gulf of Mexico. In late April, the agency issued an official document containing various options of mostly positive changes to federal management of bluefin. This is an important first step in a long process toward changing fishing regulations. It is also a critical opportunity for public involvement. Comments, including yours, can help NOAA determine which recommendations are best for managing bluefin tuna.

The solutions put forth vary widely. One option would exacerbate the problem of surface longline fishermen catching and killing bluefin tuna by increasing their share of the U.S. quota at the expense of fishermen using selective gear, including rod and reels and harpoons. More effective alternatives include prohibiting surface longlines in the Gulf, strict limits on bluefin catch by the surface longline fleet, and increased reporting of all surface longline catch to strengthen enforcement of the new limits.

Here's the bottom line: Opportunities to protect and restore giant bluefin tuna are rare. In the past, U.S. and international decision makers have abdicated their responsibility to manage bluefin for the long-term viability of the fish and the communities that rely on them. Now is the time for anglers, artisanal commercial fishermen, conservationists, and other ocean enthusiasts who understand the importance of these great fish to get involved. Just because NOAA has identified the problem and potential solutions does not mean we can sit back and assume that the agency will automatically enact them as regulations. Public support for these alternatives is essential to getting them adopted. Please click here to submit your comments to NOAA before July 15, 2012.

Scroll through our interactive timeline of surface longline fishing in the Gulf of Mexico: