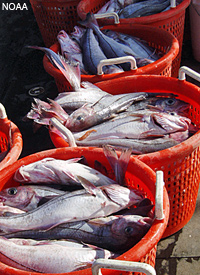 Last week, the New York Times published a blog and an editorial recognizing the progress made in the management of U.S. ocean fisheries. Overall, more than 100 newspapers across the country have covered a promising new report from the National Oceanic and Atmospheric Administration (NOAA) that I discussed in my most recent blog post.

I want to follow up to make an important distinction between catch limits and catch shares, a difference that has been inadequately explained by NOAA and has resulted in some understandable confusion. The Magnuson-Stevens Fishery Conservation and Management Act requires properly set and enforced catch limits that prevent overfishing and ensure the rebuilding of depleted fish populations.

All of the rebuilt and recovering populations highlighted in the NOAA report are managed using science-based catch limits. Once these are set, fishery managers may elect to use catch shares, one of a variety of allocation methods, to divide up established quotas. Catch shares are successful as a conservation tool only if they are properly designed and coupled with catch limits. Some of the U.S. fish populations declared rebuilt in 2011 are managed using catch shares systems, but most are not.

In the very near future, the secretary of commerce is expected to approve the final fishery management plan amendment to establish enforceable science-based annual catch limits for every federally managed U.S. ocean fish population. This milestone is great news for those of us who love fish, fishing, and seafood.

If these catch limits are properly implemented, we can expect populations to continue to recover and thrive, providing growing economic and environmental benefits. Managers and stakeholders should give careful consideration to how these benefits are allocated, including through the use of catch share programs, but the bottom line is that sustainable fisheries depend on science-based catch limits.