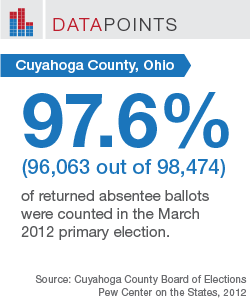 A vast amount of elections data can be found at the Cuyahoga County, Ohio Board of Elections website, through its detailed post-election certification and audit reports. This information includes:

In the March 2012 primary election, 97.6 percent of returned absentee ballots were counted, and of those that were rejected, just over half were not counted because they were returned too late. Look for further exploration of these data in future dispatches.