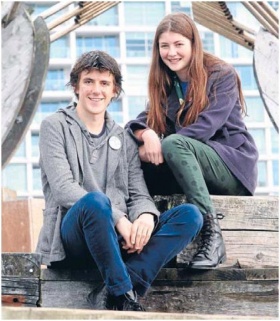 Sir Peter Blake's legacy is living on among a group of Kiwi teens preparing for their own adventure of a lifetime.

The Sir Peter Blake Trust has selected 30 teenage students for the 11-day Young Blake Expedition to the remote Kermadec Islands.

The group – including 15-year-old Asia Brownlie, from Wellington Girls' College – will be charged with contributing to scientific knowledge of the islands by helping with shark tagging, dolphin DNA sampling and plankton monitoring.

They will travel to the Kermadecs onboard the HMNZS Canterbury, and during their stay will observe the island group's unique flora and fauna.

"I'm looking forward to doing everything up there, but especially the snorkeling and seeing all the fish and marine life" Brownlie said.

"Being out of the sight of land will also be exciting in itself. The Kermadecs are one of the last sites in the world that have been named pristine ... it will be an exciting trip."

The Kermadec Islands are 800-1000km north-east of New Zealand.

The 13 volcanic islands are a nature reserve managed by the Department of Conservation, with the 745,000ha of ocean surrounding them protected as New Zealand's largest marine reserve.

She said that prior to their departure on the expedition, she had tapped into the first-hand knowledge that Bornholdt's father, Greg O'Brien, had of the islands. O'Brien, an artist, travelled to the Kermadecs with the Pew Environmental Trust last year.

The teens on the Young Blake trip participated in the recent Youth EnviroLeaders Forum in Auckland.

Sir Peter Blake Trust chief executive Shelley Campbell said the famous New Zealand adventurer would be proud of the "superb calibre" of teens chosen to travel to the Kermadecs.