Key challenges in the governance of marine biodiversity in areas beyond national jurisdiction include:

Conservation: The status of marine ecosystems and associated resources continues to deteriorate. Only around 1% of the ocean is currently protected. Overfishing, climate change, ocean acidification, pollution, invasive species and other stressors continue to adversely impact the ocean.

Integration: Sustainability requirements are not successfully integrated in other policy areas, such as fisheries, trade and development.

Specifically, Pew calls on States to recommend that the UNGA in this year's Oceans and the Law of the Sea Resolution initiates the negotiation of a new implementing agreement under the United Nations Convention on the Law of the Sea (UNCLOS) for the conservation and sustainable use of marine biological diversity in areas beyond national jurisdiction.

The High Seas and the UNGA

The high seas contain perhaps the largest reservoir of biodiversity left on Earth. But as our technological capacity and demand for resources have grown, the human footprint on the ocean has expanded. Today, the oceans are under enormous pressure from fishing and other stressors, yet the rules and regulations and institutional governance structures for the conservation and sustainable use of marine biodiversity have not kept pace with these developments.

The international community has consistently voiced concern that current ocean governance does not sufficiently address high seas issues. In response to these concerns, the UNGA established the UN Ad Hoc Open-ended Informal Working Group to study issues relating to the conservation and sustainable use of marine biological diversity beyond areas of national jurisdiction (BBNJ) in 2004. 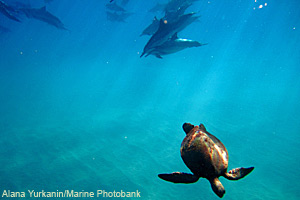 The most significant progress at the meeting was a growing common understanding between many States, including the G77, the previous European Union (EU), Mexico, Monaco, and others that a new implementing agreement under UNCLOS is needed to facilitate implementation of those provisions under UNCLOS related to the conservation and sustainable use of biodiversity and that the time has come to move towards a formal negotiation process.

Despite the large coalition of States who sought a move towards negotiation, a small bloc was able to prevent adoption of a recommendation, which reflected this majority opinion. Nevertheless, participants were able to agree to recommend that a process be initiated with a view to ensuring that the legal framework for the conservation and sustainable use of marine biodiversity in areas beyond national jurisdiction effectively addresses those issues by identifying gaps and ways forward, including through the implementation of existing instruments and the possible development of a multilateral agreement under the United Nations Convention on the Law of the Sea (UNCLOS). That process was in fact initiated by the General Assembly in the 2012 Oceans and the Law of the Sea resolution.

In 2011, the BBNJ identified a package of issues that could be addressed, together and as a whole. These issues included:

In parallel to progress taking place at BBNJ , the importance of high seas governance issues and oceans has been highlighted in the consultations leading up to the United Nations Conference on Sustainable Development (UNCSD or Rio+20). Text within the Zero Draft of the Rio+20 outcome document (paragraph 80) echoed calls for the negotiation of a new implementing agreement under UNCLOS to protect high seas biodiversity.

Many governments, including the G77 and the EU , stated strong support for progress on this issue at Rio+20, recognizing the need for stronger political impetus. Rio+20 provides a unique opportunity for the global community to move forward in a meaningful way on high seas conservation and management—recognizing that true progress is impossible unless action is taken to launch the negotiation process for a new implementing agreement under UNCLOS.

Pew therefore calls on BBNJ to:

Recommend the urgent initiation of formal negotiation of a new implementing agreement under UNCLOS for the conservation and sustainable use of marine biological diversity in areas beyond national jurisdiction and the revision of the BBNJ mandate to this end.

We call upon States at the 2012 BBNJ meeting to address current gaps in ocean governance and take strong action for the conservation and management of biodiversity in areas beyond national jurisdiction (ABNJ). A new agreement under UNCLOS is critical if the world is to make progress on high seas governance. Pew urges the international community to build on growing political momentum from the last session of BBNJ and ongoing consultations within the Rio+20 process.

At its 2011 meeting, the BBNJ decided to organize intersessional workshops, aimed at improving understanding of the issues and clarifying key questions as an input to the work of the BBNJ. However, there is a growing concern that these workshops are being used to avoid or delay initiation of formal negotiations.

Pew would like to highlight that the different items under discussion have already been subject to extensive consideration in various fora. Given the urgent need for States to fulfill their obligations under UNCLOS, Pew urges States to ensure that intersessional workshops not prevent commencement of formal negotiations, but rather serve to inform the position of States in the context of these negotiations.

The international community is calling for a strong outcome for the ocean at Rio+20. However, whether this will be achieved is still unclear. Conserving high seas biodiversity is crucial for achieving sustainable development objectives and ensuring the continued viability and health of the ocean. BBNJ must help ensure progress towards the development of new governance measures for high seas biodiversity and carry forward the momentum for a strong outcome for the high seas.