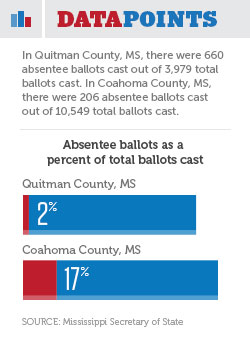 A 2012 post-election report by the Mississippi secretary of state’s office shows that statewide, 1,285,584 ballots were cast in last year’s presidential election. Of those ballots, 106,722, or 8.3 percent, were absentee. Looking across the state’s 82 counties, however, the report found significant variation in the rate of absentee voting.

Mississippi is one of 21 states that require voters to provide a reason to cast an absentee ballot.