Florida, not a stranger to controversy over election procedures, has been in the news again recently. 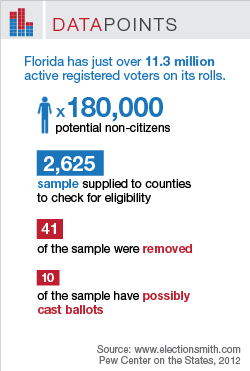 Earlier this year, the Florida secretary of state supplied counties with a list of potential non-citizens on the voter rolls. Out of 180,000 names (soon to be released to the public) a sample of 2,625 were supplied to counties to check for eligibility and possibly be removed from the voter list.

Dr. Daniel A. Smith, University of Florida Research Foundation Professor of Political Science and strong critic of this process, has examined purge data provided by the state and found that only a small number of those flagged as non-citizens on the list have actually been purged. Smith noted that of these 2,625, 41 (or 1.6 percent) were removed from the rolls. Of these 41, Smith found that just 10 have possibly cast ballots. The state has just over 11.3 million active registered voters on its rolls.

More recently, the U.S. Department of Homeland Security has agreed to give Florida and other states access to its database to check citizenship status of voters. In a letter to county election supervisors, Florida Secretary of State Ken Detzner (R) said the old list of ineligible voters is now obsolete and, with access to federal information, the state will produce a new list of potentially ineligible non-citizens.