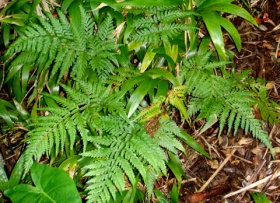 The newly described Lastreopsis kermadecensis, from Raoul Island in the Kermadecs. Photo by and courtesy of Peter de Lange.

Te Papa Research Fellow Patrick Brownsey and I (Leon Perrie) have just described a new species of fern, Lastreopsis kermadecensis. It only occurs on Raoul Island, which is the largest island in the Kermadec Islands group. Hence, the second part of the new species name!

Wikipedia’s entry on the Kermadec Islands.

Some of the specimens from the Kermadec Islands amongst Te Papa’s collections.

While the official description of Lastreopsis kermadecensis is only recent, it has actually been suspected for nearly 50 years that the Lastreopsis on Raoul Island was a distinct species.  But it wasn’t until now that someone (us) did the work to test whether this was indeed the case.  This involved comparing specimens from Raoul Island, New Zealand, Australia, and elsewhere in the Pacific.  The work was completely collections-based; neither Pat nor I have been to the Kermadec Islands! Instead, we used specimens from the collections of Te Papa, Auckland Museum, Landcare Research, the Royal Botanic Gardens Sydney, the Queensland Herbarium, and Hawaii’s Bishop Museum.

The formal description of Lastreopsis kermadecensis means we now recognise 196 ferns and lycophytes indigenous to New Zealand.  We are aware of several additional undescribed or unrecognised species, so a few more years of work will see the list top 200.

Incidentally, Lastreopsis kermadecensis is one of the first New Zealand plants to be described under the changed rules that allow electronic publication of new scientific names.

Abstract of the article setting out the changes that allow electronic publication of new scientific names for plants, algae, and fungi.