The federal Help America Vote Act of 2002 requires that all voting systems be accessible to people with disabilities, including the ability to vote privately and independently. Additionally the law mandates the use of at least one direct recording electronic voting [DRE] system or other voting system equipped for individuals with disabilities at each polling place.

And while jurisdictions across the nation have made these systems available over the past decade, they are not always put to extensive use by voters. 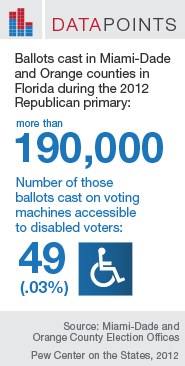 Across two of Florida’s largest election jurisdictions, Miami-Dade and Orange counties, more than 190,000 people cast ballots during the January 2012 Republican primary. Of these, however, a total of only 49 ballots, or .03 percent, were cast on voting systems that are accessible to disabled voters.

Touch-screen and other voting systems are not cheap, and with tight budgets at all levels of government, at least one other state is exploring less expensive technology.

“We have been spending large sums of money on our accessible voting system but having very few people use it. We wanted to see if there were alternatives that were less expensive, provided greater utility, and were easier to use for both voters and election officials,” Steve Trout, Oregon elections director, explained to electionline Weekly.