Sometimes, an idea comes forward in Washington that actually brings together people who normally disagree. The Fisheries Investment and Regulatory Relief Act (FIRRA) of 2012 does that and more. This bipartisan bill would provide financial support to fishermen and improve management of our oceans. Restoring our depleted fish populations would create jobs, protect existing ones, and add billions to the U.S. economy. 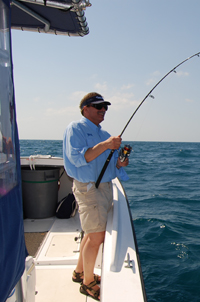 After decades of working with some of America's leading commercial and recreational fishing groups, I've found that although we might differ on how our marine resources should be managed, we are on common ground when it comes to the need for dedicated funding for sound science and management.

On March  12, 2012, Sens. John Kerry (D-Mass.), Olympia J. Snowe (R-Maine), John D. Rockefeller (D-WV), Scott Brown (R-MA), and Sheldon Whitehouse (D-RI) introduced the FIRRA (S.2194). Reps. Barney Frank (D-MA) and Frank Guinta (R-NH) are expected to introduce a companion bill in the House. This bill would redirect approximately $100 million in existing funds from duties on imported fish products each year to key programs that are critical to sustainably managing marine resources and aiding the fishermen and communities dependent on them. And a growing chorus of voices from around the country—including the Pew Environment Group—is speaking up in support of this much-needed legislation.

In 2011, Pew joined 246 groups and businesses in signing a letter asking Congress to place a priority on funding for fisheries data collection in fiscal year 2012. We also met with congressional staff members and delivered photos of constituents from around the country and all walks of life, demonstrating the diversity of people who view funding for fisheries data collection and science as a good investment.

Although we might differ on how our marine resources should be managed, we are on common ground when it comes to the need for dedicated funding for sound science and management.- Lee Crockett, director of U.S. Ocean Conservation

Although annual appropriations are critically important, we also need stable, dedicated funding to uphold the science and management that serve as the foundation of healthy fish populations and thriving businesses. Thanks to the foresight of key congressional leaders, we finally have the opportunity to establish such support with this legislation.

How the Investment Act Would Work

Since 1979, a portion of the duties levied on imported fish products have been transferred into the general operating account of the National Oceanic and Atmospheric Administration (NOAA) on an annual basis. The FIRRA would ensure that these funds (which the government estimates at $124 million in the upcoming fiscal year) are used for critical research, monitoring, and management programs, as well as provide valuable assistance to fishermen and their communities.

This bill would create a regionally-based grant program that would direct approximately $70 million a year to vital, regionally important projects. The eight regional fishery management councils would be responsible for identifying investment priorities and recommending grants for each region, ensuring that funds target important regional needs. The remainder of the funds would be available for NOAA to use for special fishery needs and problems, including providing disaster assistance, improving shoreside infrastructure, seafood promotion, and managing highly migratory species such as bluefin tuna.

Projects the Bill Would Fund

Under the new bill, several types of programs would be eligible for funding, among them:

In other words, the FIRRA would support the scientific research and improved management necessary to help maintain healthy oceans. It would also provide much-needed assistance to coastal communities, ultimately increasing fishing opportunities for everyone in the long run.