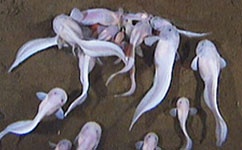 Last week, on 'Our Changing World' we introduced supergiant amphipods that had been discovered deep in the Kermadec Trench. The same expedition, led jointly by the University of Aberdeen's Oceanlabresearch facility and the National Institute of Water & Atmospheric Research, also returned with a catch of deep-sea snailfish - last caught more than half a century ago by the second Danish Galathea expedition. That expedition caught five specimens in a trawl but only two could be preserved.

Using especially designed ultra-deep submergence technology, the team deployed a camera system and a large trap to depths ranging from 6900 to 9900 metres, and caught seven specimens of the pale fish. Aboard NIWA's research vessel Kaharoa was Te Papa's fish collection manager Andrew Stewart, who says that at depths of around 7000 metres, snailfish were the only fish present. He has since identified them as the same species as those caught during the Galathea voyage, but genetic analysis is still ongoing and will complete the taxonomic identification process.

Here you can see just how soft-bodied these fish are, hence the wrinkles. The dark patch above its fin are its internal organs showing. (image: Oceanlab, University of Aberdeen)