ISLAND COLOURS: John Reynolds is presenting his abstract paintings as part of an exhibition with eight other artists to raise awareness about the remote Kermadec Islands and trench. 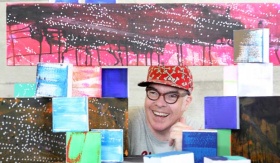 "Wakey wakey" blasts over the loud speakers every morning to raise the nine South Pacific artists on board a navy frigate steaming north-east from New Zealand.

They're heading for the unspoilt and untouched Kermadec Island group and as Ponsonby resident John Reynolds discovers the voyage really is an awakening.

The multi-media artist is back home and is part of the entourage presenting a collection of works created from the week-long trip held eight months ago.

Kermadec – a travelling exhibition – opens at The Voyager Maritime Museum downtown today and is a homage to the remote volcanic trench which spans Tauranga to Tonga.

It took two days to sail to Raoul Island which is a wildlife sanctuary that hosts no more than a handful of scientists each year.

"It was a reminder of the responsibility Kiwis have to take care of the environment – we see our isolation as a luxury but it's also vital to protect it," he says.

The series of contemporary pieces Mr Reynolds is showing includes phrases like "wakey wakey" printed on to canvas blocks, as well as paintings reflecting the colours of the islands.

The island adventure was organised by American company Pew Environment Group as part of a campaign called the Global Ocean Legacy.

The worldwide project aims to ensure ongoing protection is established for fragile and unique environments such as the Kermadec Trench.