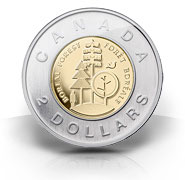 This week, the Royal Canadian Mint unveiled a $2 coin honoring the boreal – and it's clear that this forest's worth stacks up. Rivaling the Amazon in size and ecological importance, Canada's boreal provides an estimated $700 billion value annually (PDF) and serves as a buffer against climate change and food and water shortages. It has the world's most extensive network of pure lakes, rivers, and wetlands, and it captures and stores twice as much carbon as tropical forests. The boreal teems with wildlife, including billions of migratory songbirds, tens of millions of ducks and geese, and millions of caribou.

The Pew Environment Group has worked with First Nations, conservation groups, and federal, provincial, and territorial governments to protect the boreal, resulting in 185 million acres set aside from development, including key wetland and river areas. That total represents more than 12 percent of Canada's 1.2  billion acres (nearly 4.9 million km²) of boreal forest.

Learn more about the boreal forest: