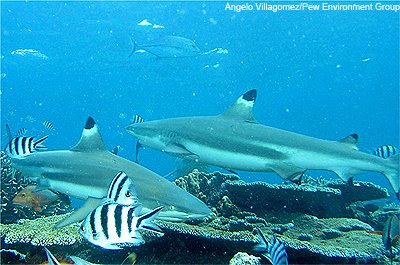 At least 75 shark and ray species inhabit the waters of the Fiji islands. According to the International Union for Conservation of Nature Red List, 66 percent of these species are globally threatened or near threatened.

Fiji is one of the top international destinations for divers in the Pacific. Scuba divers rank sharks high on their must-see lists, and many are willing to pay a premium to see them in the wild. More than half of the tourists who visit Fiji go there to participate in diving, snorkeling, or other water sports. As a result, the abundance and diversity of sharks provide a valuable asset to the Fijian economy.

Although Fiji has implemented strong conservation measures for other important marine species such as whales and dolphins, sharks are not similarly protected. Studies show that sharks are worth more alive than dead, demonstrating the need to protect these vital apex predators. Fiji would greatly benefit from the permanent protection of sharks in its exclusive economic zone, which covers 1,281,122 square kilometers (495,000 square miles) of ocean, about the size of Peru.

The Pew Environment Group is working with the Coral Reef Alliance to support the efforts of the Fijian government and other stakeholders to implement management measures that support the strongest protections for sharks.