In Washington DC, over the two-year period from 2008-2010, nine of 10 voters removed from the city’s voter rolls were removed due to death. 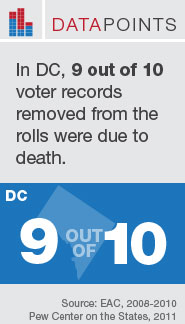 Nationally, the removal rate due to death was just under 20 percent, according to the Election Assistance Commission report, The Impact of the National Voter Registration Act of 1993 on the Administration of Elections for Federal Office 2009–2010 (NVRA). In the three previous cycles for which there are data, the EAC reported that no more than 34 percent of DC voters were removed due to death.

According to Paul Stenbjorn, executive director of the DC Board of Elections and Ethics (DCBOEE), these numbers are due to a new list maintenance effort that is long overdue. At one point, the number of registered voters almost approached the number of citizens in DC, a clear warning sign that DC’s data had grown dusty over time.

In 2010, the city thoroughly cleaned its voter rolls, something they had not done since well before the DCBOEE had a leadership change in 2009. The District started with the Social Security Administration’s certificate of death records, the most reliable source of data to find voters who are deceased. They scrubbed their registration lists against the list of deceased individuals, sent notices to the voters, and removed more than 98,000 dead voters from the rolls.

As we mentioned in our Oct. 4 dispatch, states update and clean their registration lists in different ways. Since this 2010 scrubbing, Stenbjorn said they try to repeat the process quarterly. They are also turning their attention to voters who have moved out of the District and are no longer eligible, in an ongoing effort to ensure more accurate, efficient, and secure voter rolls.