All too often, leaders in Washington focus on the short-term impacts of potential policies to the detriment of long-term benefits to our environment and economy. Ongoing efforts in Congress to weaken the federal laws that govern marine resources are a great case in point. 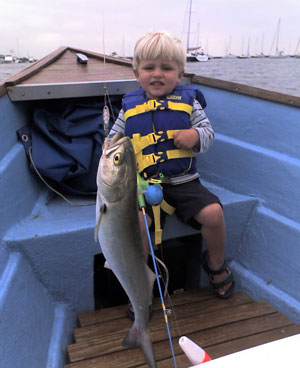 Currently, 39 of America's most commercially and recreationally important ocean fish populations are subject to overfishing, and 43 have been depleted to unhealthy levels. And while most anglers, myself included, like to catch as many fish as we can, allowing business as usual to continue and delaying rebuilding efforts risk even greater damage to depleted fish populations and those who depend on them.

In other words, while reductions in catch limits certainly affect fishermen in the short-term, the long-term benefits they will enjoy from rebuilt populations far outweigh this temporary impact. Indeed, as studies have shown, healthy fish populations create jobs, support coastal economies, help repair damaged marine ecosystems and provide increased recreational opportunities for anglers like myself to bring home fish for my dinner table more often.

Making an investment in our future

The formula for achieving these results is spelled out in the Magnuson-Stevens Fishery Conservation and Management Act (MSA), and it is simple: first, do not allow more fish to be taken in a year than nature can replace. Second, rebuild depleted fish populations (PDF).

A proven recipe for success

Nearly 20 percent of America's most commercially and recreationally important species are fished at unsustainable levels, but where the National Marine Fisheries Service has implemented fishery management plans using these two basic principles, there has been great success. I'll give three examples.

We must capitalize on these successes and finish the job of rebuilding valuable U.S. fish populations. The examples above show that taking steps now to reduce fishing pressure on depleted populations will yield benefits for fishermen and the environment well into the future. And they are also a great example of how the MSA, which celebrates its 35th anniversary this year, is working.