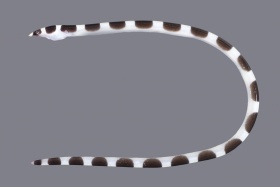 A new fish record for New Zealand has been found – the saddled snake eel’s dramatic black and white stripes make it look like a sea-snake. And that is exactly what it’s trying to do – mimic a more dangerous animal so that other critters avoid it.

More new species - including a "straightened-out seahorse" - have been found in New Zealand's largest scientific expedition exploring the Kermadec  Islands.

Scientists say the pipe fish, a white creature with "striking" orange spots, is probably new to science and while only small, represents a significant find.

"We suspect the flounder doesn't grow very big as the largest one we have collected is just 10 centimetres long, but it's a pretty wee thing.

"Probably the most exciting find is the pipe fish. Pipe fish are related to sea horses, and are really just like a sea horse that has been straightened out."

The team, which includes experts from the Department of Conservation, Te Papa, NIWA and Australian Museum, have also recorded a number of species new to New Zealand.

These include a shark, a zebra lionfish, a tropical banded eel, a blackspot sergeant and a tropical goatfish.

New species have also been found on dry land.

Department of Conservation botanist Dr Peter de Lange has found three species of filmy ferns that are new records for the Kermadecs.

Confirming the new species may take months, as the material is sent to experts around the world to be identified.

The expedition has been focusing its attention around Raoul Island, and the small islands nearby, at the northern end of the Kermadecs.

It will now move south to Macauley Island, and over the next eight days the expedition will carry out surveys around the four southern islands in the island chain.