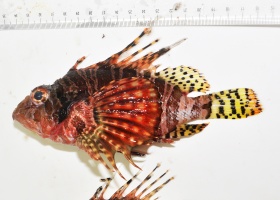 From tv one news

The first zebra lionfish ever recorded in New Zealand has been discovered in the Kermadec Islands by a team of New Zealand and Australian scientists.

At the end of the first week of a three-week expedition lead by Auckland Museum, the expedition team believe the lionfish is likely to be just one of several new species they have collected.

"The other night we found an eel that none of the fish experts on the boat can identify - so it could possibly be a new species but we won't know that until we get back from the expedition and can send it to an eel expert to confirm its identity.

"Every dive we make has the possibility of finding creatures new to the Kermadecs, new to New Zealand and even new to science."

The Kermadec Islands are 1000 north east of mainland New Zealand and have been protected as a marine reserve for more than 20 years.

Read more about the Kermadec expedition on the Auckland Museum site.