The U.S. will likely owe $10.4 trillion this year, its largest debt relative to the economy since 1950.  However, the Congressional Budget Office (CBO) projected in 2001 that the federal government would erase its debt in 2006 and be $2.3 trillion in the black by 2011 – a $12.7 trillion difference from today's reality.

This fact sheet highlights the extent to which major legislation enacted over the last decade and other factors have contributed to the Great Debt Shift - the difference between CBO's 2001 projections and actual debt today. The methodology and data can be found in these links: methodology and data.

Click below to see larger image, or see page 4 in the Great Debt Shift (PDF). 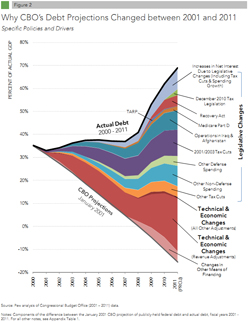