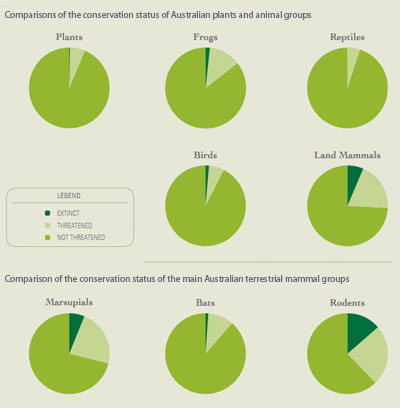 Like the Amazon rain forest and Canada's boreal forest, the Australian outback is one of the great natural places remaining on the planet. Stretching across central and northern Australia, the region consists of forests, woodlands and grasslands in which a wide array of indigenous plants and animals can be found. In fact, Australia leads all countries in the number of native mammal and reptile species.

Despite its iconic status, the outback's natural heritage is under threat. In addition to an insufficient amount of highly protected areas, much of the region has too few people to properly care for the land. Wildfires, invasive weeds and feral animals are causing significant land degradation and wildlife extinction. In fact, a recent study (PDF) found that, based on current trends, many native mammals will become extinct in northern Australia in the next 10 to 20 years.

To help protect the outback, the Pew Environment Group's Wild Australia program, a joint initiative with The Nature Conservancy, is thinking big by using conservation approaches that care for this vast landscape as a whole.

In Australia's Channel Country, we are working to protect the natural water flows of three rivers―the Georgina, the Diamantina and Cooper Creek―whose huge water catchments cover an area of more than 135 million acres. After periodic heavy rains, the rivers flood across thousands of miles, bringing life-giving waters from the country's tropical north to its arid center. Waterbirds migrate here from across the country to breed and feed.

To protect this natural phenomenon, we initiated the Western Rivers Alliance, a partnership of conservation groups and local people. In December 2010, the first of the three rivers—Cooper Creek—and its surrounding catchment was officially proposed for protection under the Queensland state government's Wild Rivers Act. This act will ensure the long-term protection of the three rivers and stop destructive irrigation and mining on 12.8 million acres of floodplains and wetlands.

We need to act urgently to ensure the long-term protection of this extraordinary global treasure.Barry Traill, director of the Wild Australia Program, Pew Environment Group 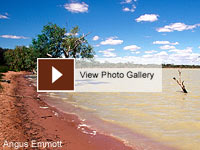 In West Arnhem Land in Northern Australia, we are supporting the work of Warddeken Land Management and the Djelk Rangers. These Aboriginal rangers maintain the health of their lands on the floodplains and in the gorges and rock plateaus. A key aspect of their work is managing fires—both controlled and uncontrolled—across the landscapes. On foot, from vehicles and by dropping incendiaries from helicopters, they establish burnt firebreaks before the land dries out too much during the winter season. Along with direct firefighting, these breaks control the fierce and highly destructive fires that occur in the later dry season. This work helps to reduce greenhouse gas pollution caused by very large, uncontrolled wildfires and also plays a vital role in maintaining the area's many unique species of native plants and animals.