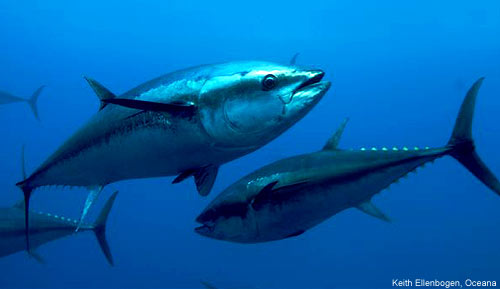 The International Commission for the Conservation of Atlantic Tunas (ICCAT) is a regional fisheries management organization responsible for the conservation and management of tunas and tuna-like species in the Atlantic Ocean. For too long, ICCAT countries have overseen precipitous population declines of bluefin tuna, sharks and other marine species, while illegal, unreported and unregulated (IUU) fishing threatens any conservation action.

Atlantic bluefin tuna are severely threatened due to decades of overfishing, IUU fishing and irresponsible management. Populations have declined by up to 85 percent since 1970. These fish are hunted commercially to supply the lucrative sushi trade; a single Atlantic bluefin can sell for more than $100,000. To complicate matters, fishing countries regularly underreport their catches and scientists are forced to provide highly uncertain advice leading to what Pew calls the “crystal ball” approach to bluefin tuna management. ICCAT countries regularly settle on overly optimistic quotas, further threatening the species and the livelihoods of fishermen who depend on their continued viability.

Sharks caught in high-seas fisheries are among the oceans’ most vulnerable animals. Their low reproductive rates make them particularly susceptible to overfishing. Up to 73 million sharks are killed annually to support the global shark fin trade. In 2010, ICCAT adopted measures to prohibit the retention of Oceanic Whitetip sharks and hammerhead sharks caught in ICCAT fisheries. Although this marked an important step for shark conservation, additional management measures are required to ensure the future sustainability of these vulnerable species. Sharks urgently need scientific, precautionary management plans in place with catch limits to ensure their long-term survival.

Solutions to these problems exist and are within reach.

At the ICCAT meeting in November 2010, the Pew Environment Group called on ICCAT member nations to: