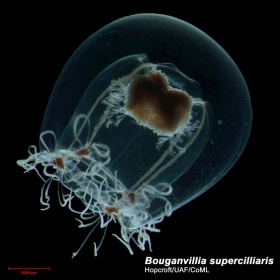 The first-ever global Census of Marine Life will officially conclude today at a news conference in London, after a decade of marine exploration.

In one of the largest scientific collaborations ever conducted, more than 2,700 Census scientists from 80 countries spent over 9,000 days at sea on more than 540 expeditions, plus countless days in labs and archives.

Released today are maps, three books (see below), and a highlights summary that rounds out a decade of discovery.

Full background information and resources can be found on the CoML website.

The Science Media Centre held an online briefing earlier this year with Dr Mark Costello of University of Auckland, lead author of one of the final pieces of new research to emerge from the Census. A recording of that briefing and slides are available here.

New Zealand scientists who led one of the Census projects — the Global Census of Marine Life on Seamounts (CenSeam) — have provided the following comments to mark today’s announcements:

“Seamount research has progressed substantially in recent decades. However, despite the increased geological, oceanographic, and biological sampling of seamounts, only a small percentage of the oceans’ seamounts have been surveyed.

“Every time we put down a camera or a small net on a seamount, we see different animals, many of which are new to science.

“CenSeam has provided a lot of good science to inform, and hopefully improve, the management of commercial fisheries and mining …for example we have developed a seamount classification scheme which can help environmental managers include representative seamounts in network of marine protected areas.

“Commercial trawl fisheries are a major threat to seamount communities. We have quantified the extent of the vulnerability, and risk to seamount benthic communities from fishing…and identified the most at risk areas as concentrated in the South Atlantic, Southern Indian, South Pacific, and North Atlantic Oceans.

“There is growing evidence of the impact that bottom trawling has on seamount communities. Recovery of the seafloor communities is very slow. Our research has shown very little change even 10 years after fishing has stopped.”

“Censeam researchers have produced results that have challenged some of the reigning paradigms in seamount ecology. Seamounts do not appear to have such distinctly different seabed communities as was previously thought. Endemism is not particularly high, nor are most seamounts island-like in nature.

“Our research has confirmed that seamounts can be productivity hotspots in the ocean, where communities can be abundant and have high biomass compared to other deep-sea habitats.

“My personal highlights during CenSeam have been seeing New Zealand science make such a significant contribution to a global endeavour, and watching the myriad of animals materialize into view on the video coming directly from the camera flying over seamounts at the furthest reaches of and beyond New Zealand’s EEZ”

“There is still a lot of seamount research to do, but we’ve made a decent contribution and I’m looking forward to seeing our work be used by environmental managers.”

“We estimate that there may be up to 100 000 seamounts in the world’s oceans, less than 300 have been studied in enough detail to describe adequately what lives on them.

“The discoveries of communities of animals never before seen has helped fill in another piece of the jigsaw, and research on New Zealand’s seamounts has made a significant contribution to our global understanding of seamount ecosystems”

Highlights for me of CenSeam included experiencing 15m swells, which certainly demonstrated how hard ship based research can be….not to mention the risks of sending equipment down to depths in excess of a kilometre.

“Of course, whilst 2010 marks the end of the very first Census of Marine Life, really this is only the beginning….”

CenSeam (a Global Census of Marine Life on Seamounts) is a network of more than 500 scientists, policy makers and conservationists from around the world who have increased our understanding of what factors drive seamount community composition and diversity, such that we can better understand and ameliorate the effects of human activities.