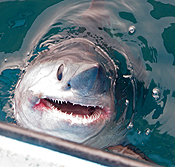 Ocean Conservancy and Pew Charitable Trusts appreciate this opportunity to participate as observers to this year’s annual meeting of the International Commission for the Conservation of Atlantic Tunas (ICCAT) in the beautiful and richly historic city of Marrakech, Morocco.

Our organizations were among the five founding members of the Shark Alliance, a coalition of conservation, scientific, recreational organizations dedicated to science-based shark conservation that has grown to nearly 60 members since April of 2006.

We are hopeful that ICCAT will this year become the first of the world’s Regional Fishery Management Organizations to restrict catches of highly vulnerable species of sharks.

We support the scientific recommendations for shark conservation action offered by the Standing Committee on Research and Statistics (SCRS) and the expert panel convened by the Lenfest Ocean Program (full report at www.lenfestocean.org). Specifically, we urge ICCAT Parties to protect (through mandatory release and/or prohibition on retention) particularly vulnerable and/or depleted shark species taken in ICCAT fisheries. Of the suite of species recommended for protection by the Lenfest experts, we suggest priority be given to the following species, both of which have high rates of post release survival:

In addition, we encourage the adoption of concrete, international restrictions in order to implement the 2007 ICCAT Recommendation to reduce fishing mortality on North Atlantic shortfin mako sharks (Isurus oxyrinchus), also classified by IUCN as Vulnerable. Lenfest experts have specifically recommended that ICCAT prohibit take of smooth hammerheads (Sphyrna zygaena); because IUCN considers great hammerheads (Sphyrna mokarran) and scalloped hammerheads (Sphyrna lewini) to be Globally Endangered, we believe that all three of these hammerhead species warrant protection through ICCAT. Given the intense fishing pressure on blue sharks (Prionace glauca) in the face of uncertain status, we support a precautionary cap on catch of this species, to be revised safe fishing levels are determined.

Because most sharks grow particularly slowly, mature late, and produce a small number of young, they are generally more susceptible to overexploitation and long-standing depletion than other fish species taken in ICCAT fisheries. International catch restrictions on pelagic sharks are essential for preventing further depletion of these highly migratory and highly vulnerable species.

Based on these factors, we welcome decisive, landmark action by ICCAT to conserve Atlantic sharks, beginning this week with safeguards for porbeagles, threshers, hammerheads and shortfin makos.

We look forward to working with ICCAT Parties in the coming days and hope for progress toward improving the conservation status of Atlantic sharks.