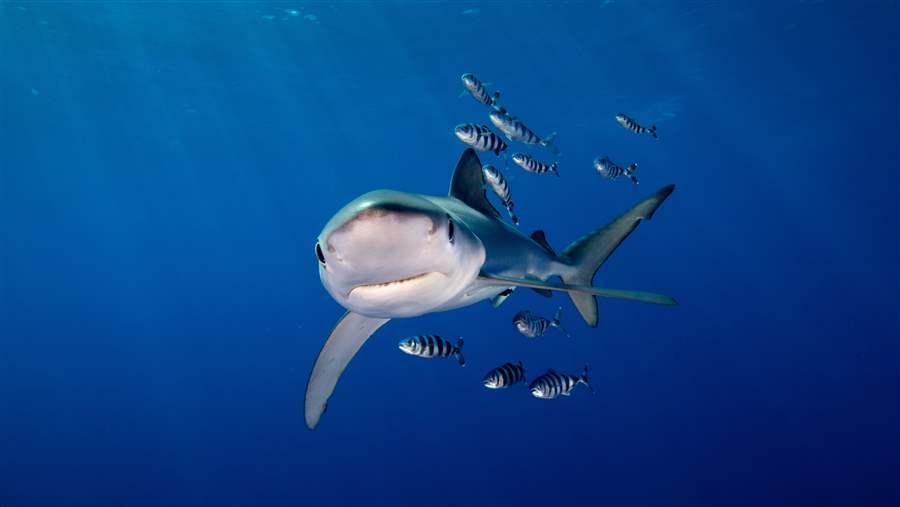 MANILA, Philippines—The Pew Charitable Trusts today praised the 124 governments of the U.N. Convention on the Conservation of Migratory Species of Wild Animals (CMS) for taking action toward protecting six shark species. The decision came at the end of the weeklong 12th Conference of the Parties (CoP12) in Manila.

The governments of Honduras, Israel, Mauritania, Monaco, the Philippines, Samoa, Senegal, Sri Lanka, and Togo proposed six species—whale sharks, angel sharks, white-spotted wedgefish, common guitarfish, dusky sharks, and blue sharks – for protection through addition to the CMS lists, known as appendices. Appendix I prohibits the catch of any of these endangered species from any place they migrate, and Appendix II identifies the shark species most in need of conservation action, encouraging cooperation to properly manage and protect the species throughout their migratory range.

“The momentum for protecting sharks continues to build, thanks to the significant step CMS members have taken toward better management of six at-risk shark species.

“These species, like many others, are migratory, even those that spend part of their lives in protected waters, leaving them vulnerable to various types of fishing gear. In some regions, the newly protected shark species have experienced population declines of 50 percent or more. The commitment that CMS parties will work together to offer these sharks the help they need to recover is critical to their depleted populations, and is important for making the entire ocean safer for the species that migrate.

“The CMS Appendix II listings allow for the sustainable fishing of sharks, but if management measures are not effectively implemented, species listed in Appendix II could qualify for the stricter protections of Appendix I. To ensure that these Appendix II listings have the needed impact, governments must follow through on their commitments to cooperate by developing stronger domestic shark protections, while considering international management through regional fisheries bodies and the Convention on International Trade in Endangered Species of Wild Fauna and Flora.

“As for the species that were protected today, the CMS parties have shown that proper management for imperiled sharks and rays continues to be a global priority. We applaud governments for offering the highest level of protection for the whale and angel sharks and the common guitarfish in the Mediterranean, where urgent action is needed, and are encouraged to see additional species—blue and dusky sharks, white-spotted wedgefish, and common guitarfish globally—afforded an opportunity to recover before their populations require full protection. This is an important step toward safeguarding shark populations for generations to come.”

6 Migratory Sharks Are up for Protections at CMS CoP12

Protections for 6 shark species to be considered

Sharks, from the largest fish in the sea&mdash;the whale shark&mdash;to flattened, strangely shaped rays such as guitarfish, are still being killed at an unsustainable rate, but several could receive much needed protections this month.&nbsp;

Migratory Sharks Sustain Livelihoods in the Philippines and Worldwide

The whale shark, the largest fish in the sea, is facing population declines and was reclassified as endangered last year by the International Union for the Conservation of Nature (IUCN). At the same time, the ecotourism value of these migratory sharks in places like Donsol Bay, Philippines, has made shark tourism a lucrative alternative to fishing. To address the declining population and preserve this tourism value, the Philippines government has protected whale sharks nationally. However, these protections may not be enough.

June 14, 2021 Tuna Fisheries Would Benefit From Onboard Observers

States Can Use Federal Stimulus to Safeguard Fiscal Health

Washington Lowers Barriers to Treatment for Opioid Use