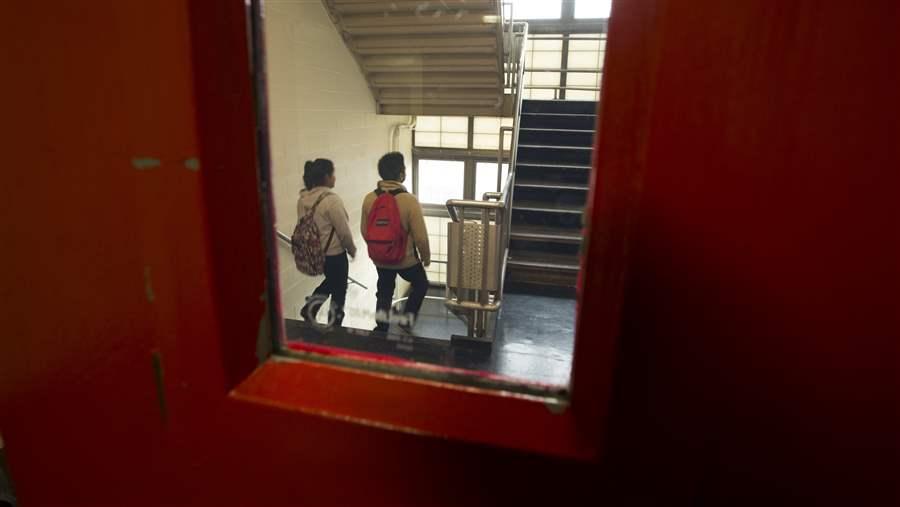 PHILADELPHIA—A new analysis by The Pew Charitable Trusts explores for the first time the process of matching eighth-graders with district-run high schools in Philadelphia, shedding light on which students ended up in 21 special admission programs—generally considered the most desirable of those run by the School District of Philadelphia.

“Getting Into High School in Philadelphia: The Workings of a Complicated System” examines demographic and other information on 16,790 eighth-graders who were seeking enrollment in a district-run Philadelphia high school for the 2015-16 school year. Three main elements influenced which of these students were accepted into the special admission programs: academic qualifications, especially Pennsylvania System of School Assessment (PSSA) test scores; student and parent/guardian participation in the application process, through which they selected the schools the students wanted to attend; and admission decisions made independently by administrators at individual schools..

Pew’s analysis found that other factors also influenced which students were admitted to the special programs:

The study shows that all of these elements resulted in ninth-grade student bodies in the special admission programs that were different from the district’s ninth-grade population as a whole:

“In Philadelphia, eighth-graders are not required to attend a particular high school; instead, they go through an application process similar to that of applying to college,” said Michelle Schmitt, a researcher with Pew’s Philadelphia research initiative and author of the report. “Philadelphia’s system for placing students in various high schools and programs, including the highly competitive special admission programs, is complex and potentially challenging for students and parents to navigate. We hope this report will help policymakers and parents understand both the process and its outcomes.”

For more findings and to read the full report, visit www.pewtrusts.org/phillyhighschooladmissions.

The Pew Charitable Trusts is driven by the power of knowledge to solve today’s most challenging problems. Pew’s Philadelphia research initiative provides timely, impartial research and analysis on key issues facing Philadelphia for the benefit of the city’s citizens and leaders. Learn more at pewtrusts.org/philaresearch.

Getting Into High School in Philadelphia

The workings of a complicated system

In the School District of Philadelphia, students are not required to attend a particular high school. A wide&mdash;and potentially bewildering&mdash;variety of choices confronts eighth-graders and their parents. To go anywhere other than their neighborhood high schools, they must identify the options they think fit their needs and apply to them.