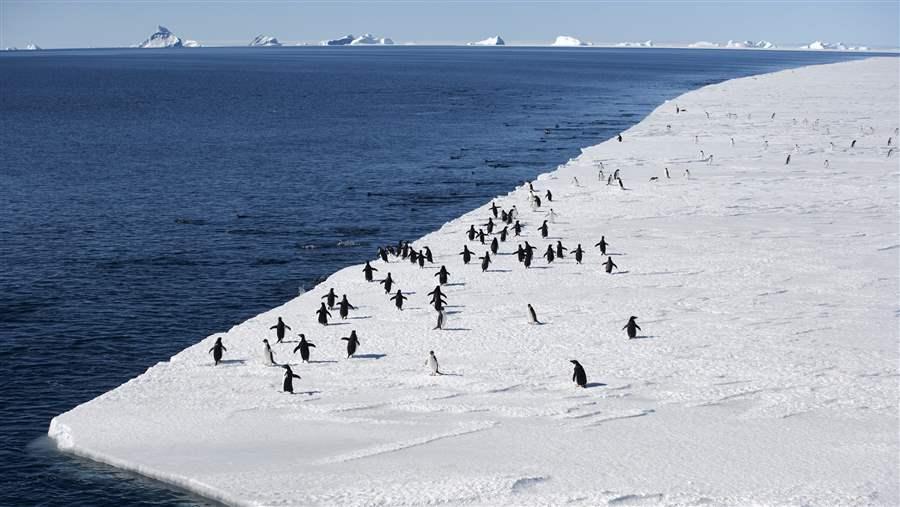 WASHINGTON—The Pew Charitable Trusts called today on the 25 member governments of the Commission for the Conservation of Antarctic Marine Living Resources (CCAMLR) to continue their efforts to establish a network of marine protected areas (MPAs) in the Southern Ocean around Antarctica.

In October, the Commission agreed by consensus to designate the Ross Sea Region MPA, at twice the size of Texas the world’s largest protected area. As a result, commercial fishing will not be permitted throughout more than 2 million square kilometers (almost 800,000 square miles), including all the area under the Ross Ice Shelf. The MPA will also safeguard habitat for the 1 million pairs of Adélie penguins that breed in the region and thousands of other species.

While this historic example of international cooperation is one of the most significant conservation wins in history for the world’s oceans, it is just the first step toward fulfilling a broader network of MPAs to which CCAMLR member governments agreed in 2002.

“The establishment of the Ross Sea Region MPA is one of the most significant developments ever to take place at CCAMLR and is precedent-setting in the realm of ocean protection. CCAMLR now has an opportunity to solidify its conservation legacy by designating additional protected areas, including the Weddell Sea and the waters off East Antarctica.

“Our global ocean is changing. Record temperatures are set each year, and industrial fishing continues to deplete marine waters of species that are critical to a properly balanced food web. The remote Antarctic continent and Southern Ocean, which encompass 10 percent of the planet’s surface, are not buffered from this change, as recent scientific analysis finds the area is experiencing species declines at a similar rate to the rest of the planet.

“This signals the need for CCAMLR to act quickly to preserve the vast, ecologically important East Antarctic coastal region, best known for its unique bottom-dwelling creatures and geography such as underwater canyons, gorges, and mountains. Designating marine reserves free of commercial fishing in East Antarctica would protect Adélie penguin colonies and allow for more research into the effects of climate change in the area.

“The Weddell Sea is home to another intact ecosystem within Antarctica’s Southern Ocean and to one-third of all emperor penguin hatchlings. Thanks to numerous deep bays formed by recesses in the coastlines and unique seafloor features, it is the birthplace of nutrient-rich currents that flow around the world. The region is also covered in sea ice nearly year-round, but recent studies have found warmer ocean temperatures and changing currents are causing the ice shelf to break and the sea level to rise.

“There is also a need for future marine protections in the Antarctic Peninsula, where for decades, commercial fishing fleets have focused almost exclusively on krill, directly threatening the food supply and habitat where breeding penguins nest and forage. Krill are the center of the entire Southern Ocean food web. A network of MPAs would ensure that krill continue to be available for penguins and other species throughout the Southern Ocean.

“Establishing additional MPAs throughout the Southern Ocean would also allow marine species to travel between individual protected areas to breed and forage, while preserving the connectivity between the numerous unique ecosystems found throughout the region. A network of MPAs would ensure that these intact and biodiverse regions are preserved for science and conservation purposes. And the collective area covered by a network of MPAs would also significantly contribute to the goal of protecting 30 percent of the world’s oceans.

“At the annual CCAMLR meeting in October, we need to see the designation of marine reserves, free of commercial fishing, in both East Antarctica and the Weddell Sea. The clock is ticking on putting in place protections that can help ensure a vibrant marine ecosystem.”

Threats to krill, penguins, and other species show the need to safeguard the Southern Ocean