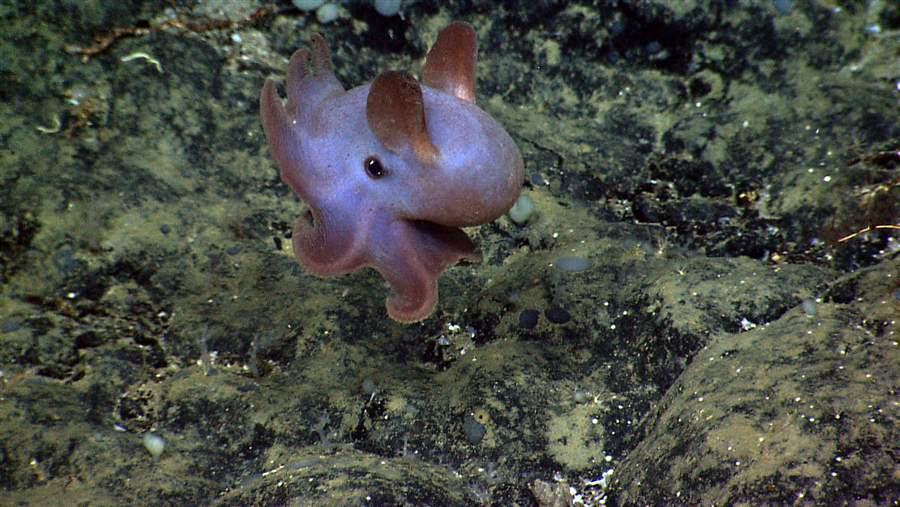 This dumbo octopus was sighted by the NOAA Okeanos Explorer ship during a dive to map the Atlantic Canyons and Seamounts in September 2014.

WASHINGTON—President Barack Obama will announce today the designation of the first marine national monument in the U.S. Atlantic Ocean—the 4,913-square-mile (12,696-square-kilometer) Northeast Canyons and Seamounts Marine National Monument. The monument, which begins about 150 miles off the New England coastline, is an unusually diverse and productive environment. It contains three submerged canyons, one of them deeper than the Grand Canyon, and four underwater mountains. It is home to a vast array of marine life including corals, whales and seabirds.

The announcement is to be made at the third Our Ocean conference, hosted by U.S. Secretary of State John Kerry.

Northeast Canyons and Seamounts Marine National Monument is the latest addition to a movement to protect special ocean areas in U.S. waters and around the world. Unlike the administration’s other marine monument designations, it is located offshore from major urban population centers: According to the U.S. Census Bureau, at least 25 million people—more than 8 percent of the U.S. population—lived in counties with ocean coastline from Maine to New York in 2010. 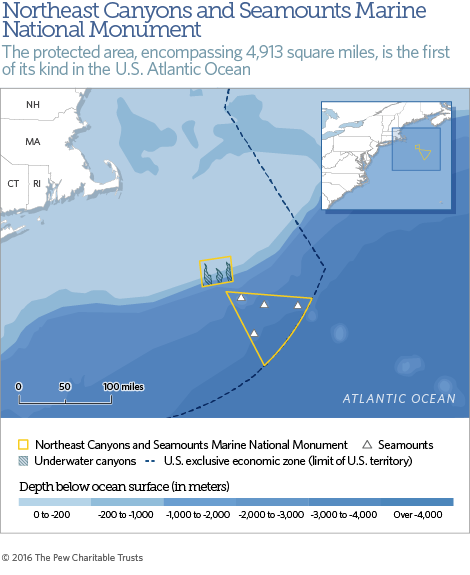 Although little fishing occurs in the area now, the designation phases out commercial fishing and prohibits other extractive activities such as mining and drilling.

“President Obama’s designation is historic for the Atlantic Ocean and contributes to global commitments to protect special ocean places,” said Lee Crockett, who oversees the U.S. ocean conservation project at The Pew Charitable Trusts. “Science is clear that setting aside biologically important areas can increase resilience as ocean conditions change.”

“The high-quality habitat in this monument supports an extraordinary array of marine life, from corals to whales to seabirds,” said Peter Baker, who directs Pew’s ocean conservation work in the Northeast U.S. “We are grateful that the president has heard the overwhelming support for protecting this place and that generations yet to come will have the chance to enjoy a healthy ocean.”

The monument’s four undersea peaks—Mytilus, Bear, Physalia, and Retriever—are extinct volcanoes that are part of the only underwater mountain range off the U.S. East Coast. Bear, the largest of the four at more than 7,000 feet, is taller than Maine’s Mount Katahdin, New Hampshire’s Mount Washington, and every other mountain east of the Rocky Mountains. The three steep canyons—Oceanographer, Gilbert, and Lydonia—cut into the eastern edge of Georges Bank and descend quickly to the deep ocean floor. The monument’s distinct physical features create niches and footholds that deep-sea corals, sponges, and many other species need to grow and thrive. 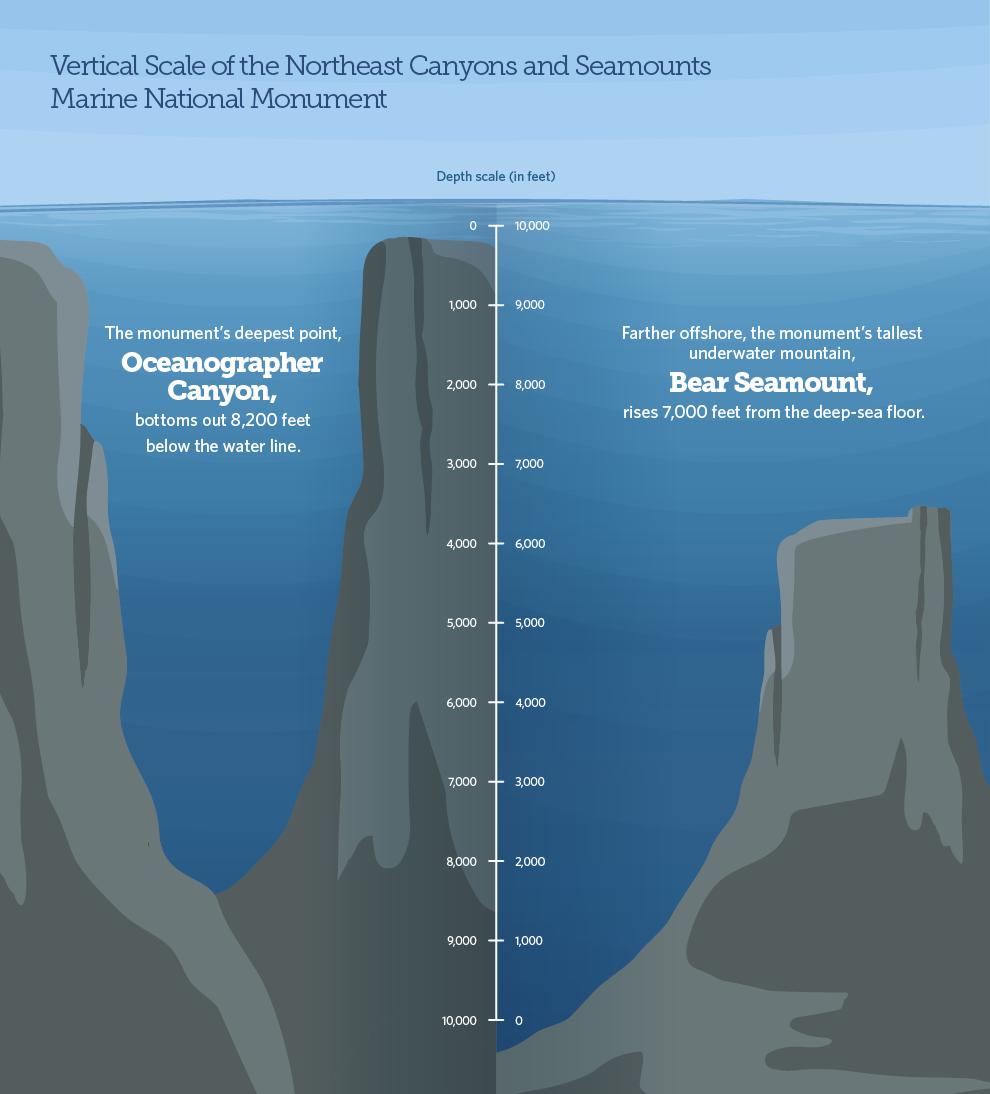 The interaction between the enormous mountains and canyons and dynamic ocean currents in the area circulates nutrients and oxygen throughout the water column. These productive conditions enable the tiny organisms that form the bottom of the ocean food web to flourish, attracting larger animals, including the largest whales and marine mammals. With climate change already affecting ocean conditions—recent research has found the nearby Gulf of Maine warming faster than 99 percent of the world’s marine waters—the monument will serve as an increasingly important refuge for the region’s sea life.

Among the species that call the new monument home are Atlantic puffins, which use the area as part of their wintering grounds—a discovery that scientists made this year. On a 2013 NOAA expedition to the canyons and seamounts, scientists sighted a Greenland shark, a species recently found to be the world’s longest-lived vertebrate. They also identified at least 73 deep-sea coral species, including 24 never before seen in the region.

Those and myriad other species now have a sanctuary where they can feed, breed, and thrive without the threat of human interference. “For everyone who recognizes the value of this unique ecosystem and cherishes a healthy, productive ocean, this monument designation is a huge win,” Pew’s Crockett said.