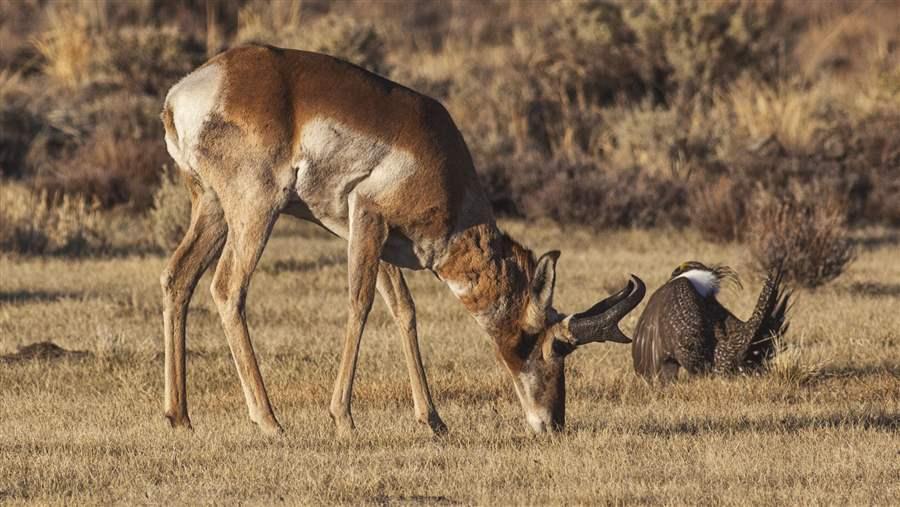 Pronghorn and greater sage-grouse depend upon sagebrush habitat.

WASHINGTON—The Interior Department’s Bureau of Land Management (BLM) issued final plans today that balance conservation with economic development across 10 Western states. These Records of Decision will direct the management of more than 50 million acres of public lands that are home to the imperiled greater sage-grouse, as well as elk, mule deer, pronghorn, golden eagles, and hundreds of other species.

On public lands in California, Colorado, Idaho, Montana, Nevada, North Dakota, Oregon, South Dakota, Utah, and Wyoming, the plans will provide critical protections for greater sage-grouse habitat and the sagebrush-steppe ecosystem as a whole, as well as for world-class hunting, fishing, backpacking, and birding—important economic drivers for local communities.

“These strong, science-based plans constitute a historic conservation action. They are both the biggest landscape-level conservation effort ever undertaken by the Bureau of Land Management and the largest land protection initiative of the Obama administration.

“More than half of all sagebrush lands have been lost, resulting in a 95 percent reduction in greater sage-grouse populations. It’s encouraging that as the largest land manager of sage-grouse habitat, the BLM is protecting the lands most important to the bird, which is an indicator species for the health of the sagebrush-steppe ecosystem, and 350 other species.

“Pew commends the leadership of the BLM and the Department of the Interior for this forward-thinking approach. The plans incorporate the best available science and responsibly balance energy development, recreation, grazing, and other activities on public lands while still protecting the Western way of life. That said, we are disappointed that the BLM’s plans did not adequately address the full range of issues in lands that involve more than sage-grouse habitat management, including failing to recognize the wilderness characteristics of the Miles City, MT and Bighorn Basin, WY planning areas, which also merit conservation.

“By considering the expertise of diverse interests that worked together for years to find common ground, and with a strong partnership of state governments, landowners, developers, Western communities, and others involved, BLM was able to largely strike the right balance. These plans will ensure continued productivity of sagebrush habitat and allow for responsible development across the West on lands owned by all Americans.”

On May 28, Interior Secretary Sally Jewell and Bureau of Land Management Director Neil Kornze met in Wyoming with that state's governor, Matt Mead (R), to announce the release of 14 BLM sage-grouse management plans. At issue is the fate of tens of millions of acres of public land that are home to the greater sage-grouse, as well as to elk, mule deer, pronghorns, golden eagles, and hundreds of other species. The sage-grouse is an indicator species: Its population reflects the ecological health of much of the interior West.