The pristine waters of the western and central Pacific Ocean are dotted with thousands of small islands, ranging from low-lying atolls to jungle-covered volcanoes. This diverse region is rich in marine resources and biodiversity—wealth that feeds local communities and drives their economies.

Scattered among these remote isles are tens of thousands of objects floating on the ocean's surface. Unlike the natural landscape, these are composed of manmade materials. Small rafts, often made of plastic or bamboo with net or rope hanging from them, drift with the currents. Tuna fishermen toss them in the water, confident that the intrigue of something bobbing at the surface, along with dangling bits below, will attract large schools of tuna. It almost always works.

On April 29, The Pew Charitable Trusts announced a new project, funded in part by the Gordon and Betty Moore Foundation, designed to help local fishery managers track and regulate these objects—and the fishing that results from their use—by way of satellite technology already employed on fishing vessels.

The western and central Pacific is home to the world's largest tuna fishery, with an annual market value of over $7 billion. A significant portion of this catch is in the waters of Parties to the Nauru Agreement, or PNA, eight island nations that have joined together to manage shared tuna resources

Tuna fishing within these countries' waters is often done in association with floating objects called fish aggregating devices, or FADs. Typically used by large-scale, commercial purse-seine vessels, FADs make catching fish all but guaranteed because some tuna species come together in large schools under floating objects. What is also certain is that the net encircling the FAD will similarly haul in other marine life and vulnerable species, such as small tuna, sharks, and billfish, that are attracted to that same floating object. Once snared, sharks and other fish—including young tuna—are brought on board, most barely alive. This wasteful bycatch threatens the region's tuna populations and marine biodiversity.

“FADs are an extension of a fishing vessel. They may not be physically connected, but these large purse-seine vessels wouldn't be able to haul in the tons of tuna they do without the floating object's ability to attract fish,” said Amanda Nickson, director of Pew's global tuna conservation work.

Still, FADs are largely unlicensed, unregulated, unreported, and untracked, despite regional requirements to report their use. Recent studies estimate that 30,000 to 50,000 FADs are introduced into the water each year in the western and central Pacific. Although fishing vessels must be registered and authorized, the same provision doesn't apply to FADs. Vessels are free to hurl an unlimited number of the devices into the ocean. Many are never recovered, leading to piles of plastic and netting washing up on reefs and beaches or just drifting in the sea and contributing to marine litter. Current management measures have done nothing to reduce the bycatch of other species. In fact, overfishing of the region's bigeye tuna population continues to be driven by uncontrolled FAD fishing.

These floating objects, despite numbering in the tens of thousands, can be monitored. Nearly all of them have satellite buoys to help fishermen keep track of them until they are abandoned.

In 2012, Pew and the Parties to the Nauru Agreement began a trial project to track FADs, which showed that the satellite buoys fishermen attach to FADs could all be tracked by the PNA and fishing vessels simultaneously. The trial also enhanced the PNA management database, allowing it to automatically track FADs in the same way it does fishing vessels.

This year the project will scale-up to track the tens of thousands of FADs drifting throughout the PNA's waters, including the prospect of electronically monitoring each time a fishing vessel sets its net on one of these objects.

“We have a responsibility to sustainably manage the fishing of tuna in our waters, and we must have transparency and cooperation from fishing vessels we permit to fish,” said Maurice Brownjohn, Commercial Director of the PNA. “As fishery managers, we owe it to our people to know where each and every FAD in our region is, who put it there, what tuna is caught on it, and what ultimately happens to it. This project will help bring the data managers and scientists need to improve assessments and day-to-day management advice.”

Once the program is fully operational, the PNA will control the first tuna fishery in the world to record data on all of the fish aggregating devices in its waters, creating new opportunities for scientists who are studying their effects, as well as improving monitoring, control, and surveillance, and increasing industry accountability.

“The scientific data collected by the FAD tracking system will be a game changer for the biological and economic sustainability analyses of tuna stocks in this region,” said John Hampton, manager of the Oceanic Fisheries Programme at the Secretariat of the Pacific Community, which prepares the stock assessments for tuna in the western and central Pacific.

“The electronic monitoring of FADs will provide the ability to understand how many FADs are deployed and how often they are fished,” he said. “Importantly, it will also provide information on the biomass aggregating on FADs, which will improve our ability to observe tuna and possibly other species, and to estimate the impacts of fisheries on the pelagic ecosystem.”

Pew also announced that it will continue advocating for members of the regional fishery management organization to adopt FAD management measures that complement the efforts led by the parties to the Nauru Agreement.

“The PNA continues to demonstrate its role as a leader in this region, and we hope that neighboring states, as well as all members of the Western and Central Pacific Fisheries Commission, take note and commit to expanding this FAD tracking throughout the region,” said Nickson. 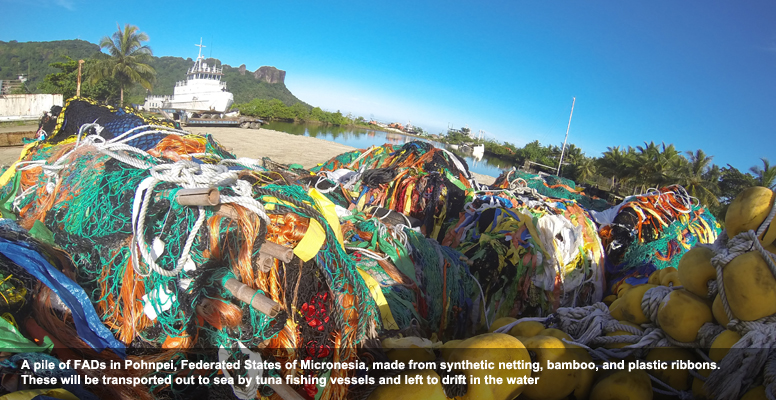