On World Penguin Day, held annually on April 25, penguin lovers, conservationists, and scientists all unite for one common purpose—to celebrate these amazing birds and to draw attention to the need to protect them. This year, The Pew Charitable Trusts is celebrating with three ways for you to support penguins:

In less than three months, two dozen countries and the European Union will decide the fate of some of the most important penguin habitat on Earth. At a special meeting in Germany July 15, CCAMLR countries could vote to permanently protect some of Antarctica's most pristine waters as the largest marine reserves in the world. World leaders are now deciding which way their countries will vote, and they need to hear from you.

We hope that you will join us in celebrating and protecting these quirky creatures from the Southern hemisphere. Stay tuned for April 25th for your chance to ask questions and be a part of penguin protection. With a critical decision on the horizon, April 25th might be the most important World Penguin Day yet. 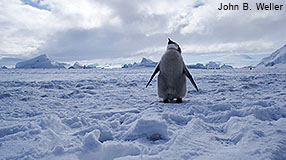 In July, two dozen countries and the European Union will decide the fate of some of Antarctica's most pristine marine ecosystems, including some of the world's most important penguin habitats. At a special meeting of the Commission for the Conservation of Antarctic Marine Living Resources, they could create the largest marine reserves in the Ross Sea and the waters off East Antarctica. Or it could leave leave the near-pristine regions vulnerable to large-scale industrial fishing.

The Ross Sea reserve has been proposed by the United States and New Zealand, and the East Antarctic reserves has been proposed by France, the European Union, and Australia. Approval of these proposals can only happen through consensus. Please ask world leaders to support fully protected Ross Sea and East Antarctic marine reserves, in time for a consensus decision this summer.

Join Pew on April 25 at 11 a.m. EDT for our special Twitter live chat with penguin experts Pablo Garcia Borboroglu, founder and president of the Global Penguin Society, and P. Dee Boersma, an expert on biological characteristics of penguins. They will answer your questions and explain why penguins matter.

Pablo Garcia Borboroglu, Ph.D, is a 2009 Pew Marine Fellow, and the founder and president of the Global Penguin Society. His research focuses on different ecological aspects of seabirds that are relevant for conservation, especially penguins. He is also an expert on marine conservation tools, planning, and implementation.

P. Dee Boersma, Ph.D is a 1997 Pew Marine Fellow. She holds the Wadsworth Endowed Chair in Conservation Science at the University of Washington, and since 1998 has been a professor of biology in the Department of Biology and an adjunct faculty member in the Department of Women's Studies. For 29 years, she has assessed the biological characteristics of penguins in Punta Tomba, Argentina, where she has documented foraging patterns, migratory routes, and anthropogenic threats to their survival. Her work has led to direct conservation action in Argentina.

Penguins from across the globe represent maine sentinels indicating dangerous conditions both in our oceans and on land. Marine biologists Dee Boersma and Pablo Boroborglu of the Global Penguin Society describe their work in studying and protecting these precious species and how others can help.

There are several species of Antarctic penguin, all with distinct characteristics. Take our quiz and find out which species you most resemble, and then take action to show your support for protection of these important species and their habitats. En Español.