Mathew Jacobson of the Pew Environment Group's boreal campaign issued the following statement today after Quebec Premier Jean Charest committed to amend "Plan Nord" legislation now under consideration by the province's National Assembly. As heads of state arrived at the Rio+20 conference to finalize a blueprint for sustainable development, Charest pledged to ensure that the pending Bill 65 aligns with his vision of “the largest conservation project in history.” The Plan Nord includes a commitment to protect half of northern Quebec—more than 600,000 square kilometers, an area about the size of France—from all industrial activity, but Bill 65 has been criticized for weakening that commitment.

"We are delighted that Premier Charest announced at Rio today that he will ensure that pending legislation on the Plan Nord will fulfill his pledge to protect half of northern Quebec from industrial activity.

"Quebec's boreal region is a world-class ecosystem, and it deserves world-class leadership. When this policy is strengthened, it could lead to the single largest land conservation initiative in history. Working in partnership with aboriginal communities and implementing science-based ecological planning, the Quebec government will create a new global model for sustainable development."

Plan Nord is a sustainable development initiative for the province's nearly 1.2 million-square-kilometer northern forest region (maps here). The area is home to a significant portion of the Canadian boreal, the Earth's largest intact forest ecosystem and its largest storehouse of carbon. Plan Nord was unveiled in 2010 by Charest, who, as Canada's minister of the environment, headed the Canadian delegation to the 1992 Earth Summit in Rio de Janeiro and was the first signatory of the Convention on Biological Diversity. 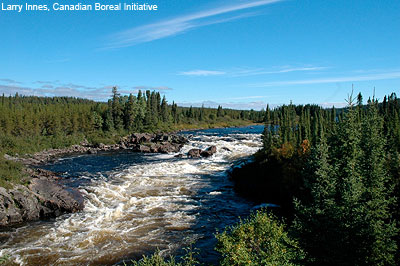