Honduras and Palau Challenge the World to Save Sharks

Honduras and Palau, two countries that have stopped shark fishing in their waters, are urging the rest of the world to conserve the world's dwindling shark populations or run the risk of losing the ocean's top predator and throwing the marine food chain out of balance. 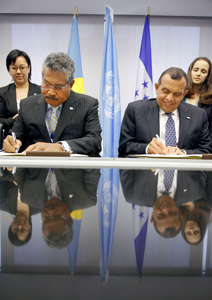 Listen to an audio recording (MP3) of the press conference.

To coincide with the High Level Plenary Meeting of the United Nations General Assembly to review the Millennium Development Goals, which include a target for preserving global biodiversity, President Johnson Toribiong of the Republic of Palau and President Porfirio Lobo Sosa of the Republic of Honduras issued a challenge to other world leaders to work together to save the world's sharks. The two Presidents are calling on coastal countries to establish shark sanctuaries in their waters, where no shark fishing is permitted, and for all fishing countries to end shark finning and the global overfishing of sharks.

“We have done what we can in Palau's waters to save these magnificent masters of the sea,” said President Toribiong of Palau, who announced the world's first national shark sanctuary at the opening of the U.N. General Assembly session in 2009.  “We have found that healthy shark populations keep our marine environment healthy and our tourism industry thriving.  However, if unregulated overfishing of sharks throughout the world's oceans continues, small island states such as ours will lose a vital resource, and the oceans on which our very lives depend will be irrevocably altered.”

“Our decision to protect sharks was made not just for this generation but for generations to come,” said President Lobo of Honduras, whose government announced a moratorium on all shark fishing in Honduran waters in February of this year.  “The price of shark fins for the global trade drives fishermen to skirt or break limits on fishing and finning that would otherwise conserve shark populations.   We call on other governments to join us in protecting sharks in their waters, for the sake of healthy coastal marine ecosystems and economic development.”

Of the 1,045 shark and ray species assessed by scientists for the International Union for Conservation of Nature (IUCN), 30 percent are threatened or near threatened with extinction.  Further, for 47 percent of species, scientists lack enough data to properly assess their population status.

Up to 73 million sharks are killed annually to support the international shark-fin trade, a globally unregulated trade that is not sustainable. In general, sharks grow slowly, mature late and produce few young over long lifetimes, leaving them exceptionally vulnerable to overexploitation and slow to recover from depletion. As key predators, the health of entire ocean ecosystems is tied to their fate.

“Scientists have linked shark overfishing to imbalances in fish populations, the collapse of non-shark fisheries and the degradation of coral reefs,” said Joshua Reichert, Managing Director of the Pew Environment Group. “Palau and Honduras are global leaders in shark conservation and we call upon coastal nations and countries with large commercial fishing fleets to accept their challenge and take action.”