Note: In February 2010, the Pew Center on the States released a new report on retirement benefits for public employees, The Trillion Dollar Gap: Underfunded State Retirement Systems and the Road to Reform. Read the key findings and download the full report.

States have promised at least $2.73 trillion in pension, health care and other retirement benefits for public employees over the next three decades, according to a report released today by The Pew Charitable Trusts' Center on the States. Promises with a Price, the first 50-state analysis of its kind, finds that states have saved enough to cover about 85 percent of their long-term pension costs, but only 3 percent of the funds needed for promised retiree health care and other non-pension benefits. All told, states already have set aside about $2 trillion to meet their long-term obligations. But they still need to come up with about $731 billion—a conservative figure that does not include all costs for teachers and local government employees. 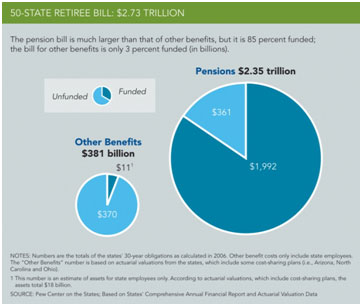 “Now we know the magnitude of this bill—and paying it will require an enormous investment of taxpayer dollars,” said Susan Urahn, managing director of the Pew Center on the States. “For states that have dug themselves into a deep hole, there are no quick and easy solutions—but there are fiscally responsible steps all states can take. These will require time, attention and, above all, political will.”

The full report and fact sheets for each state are available at the bottom of this page.

Nationally, state pension plans are in reasonably good shape. At the end of fiscal year (FY) 2006, states had set aside over $1.99 trillion of the $2.35 trillion they had made in pension promises—leaving about $361 billion unfunded.

But the good news nationally masks important variations across the states:

Retiree Health Care and Other Benefits

For years states have been required to publicly report their long-term pension liabilities. Until now, they have not had to disclose the price tag of non-pension benefits, such as health care, dental and life insurance. Because of a new rule by the Governmental Accounting Standards Board, states will identify these costs in their FY 2008 financial reports, which are expected to come out between December 2008 and March 2009. The Pew Center on the States has developed a first-of-its-kind preview of these numbers.

Pew found that states' long-term price tag for retiree health care and other non-pension benefits is about $381 billion for state employees alone (excluding obligations for teachers and other local government workers). About 97 percentof that 30-year obligation was unfunded at the end of FY 2006.

Other key findings include:

Promises with a Price finds that while there are no quick and easy solutions, states can take steps to reduce their liabilities. For example, West Virginia reduced its long-term bill coming due for its non-pension benefits by more than half, from an estimated $7.8 billion to $3.4 billion, after setting up a trust fund for payments and adopting several other reforms.

“States have the means to control their destinies. They just have to have the political will to do so,” said Katherine Barrett, co-author of the report. “For a state to succeed, it must use reliable data and good planning, carefully analyze whether proposed new benefits are affordable, and, above all, do its best to make full payments each and every year to reduce the long-term cost.”

A range of promising approaches are in play across the country. An increasing number of states are both setting aside money and restructuring benefits to reduce costs:

Promises with a Price, written by Katherine Barrett and Richard Greene, involved extensive data collection, a thorough analysis of actuarial studies and evaluations, and interviews with experts and individuals knowledgeable about particular states. For the pension systems, the Pew Center on the States examined state annual reports with information over 10 years. Data for this section were obtained from State Comprehensive Annual Financial Reports (CAFR), as well as CAFRs from state pension systems. For non-pension benefits, Pew reviewed CAFRs and the preliminary actuarial assessments completed for most states of their non-pension liabilities over the next 30 years. Several states have not completed their actuarial evaluations. The research was augmented with interviews with actuaries, economists, state controllers, auditors, legislative analysts and other experts in the field.

The Pew Charitable Trusts applies the power of knowledge to solve today's most challenging problems. The Pew Center on the States identifies and advances effective policy approaches to critical issues facing states.