Some people jump out of airplanes or go rock climbing for an exhilarating time.

For me, it’s chasing striped bass—big, powerful, and beautiful. I always feel a rush of excitement as my fishing line goes screaming off the reel once a large bass takes my lure, knowing that while adult bass in the ocean typically weigh from 15 to 30 pounds, they can grow up to 6 feet and 125 pounds. They hit the lure with quick force, fight hard, and can, despite an angler’s best efforts, sometimes escape. 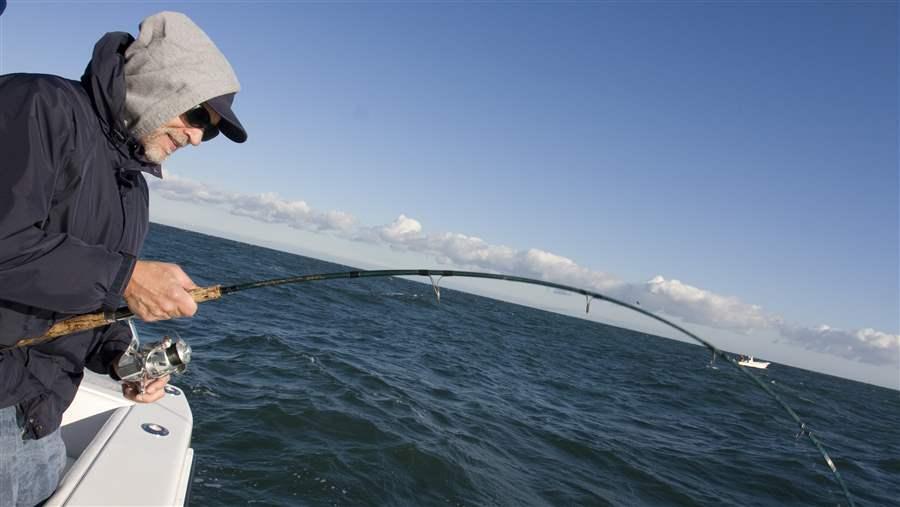 I’m a catch and release fisherman, so the trick is to reel in the fish as quickly as possible so it’s not worn-out and likely to die when—after I admire my catch and maybe take a picture—I return it to the water.

For the past six years I’ve fished for striped bass a few days each fall off Montauk, Long Island, with charter boat Capt. John McMurray, a fellow Coast Guard veteran who is a member of the Mid-Atlantic Fishery Management Council, which sets fishing policies in federal waters from New York to North Carolina. In the past, McMurray and I caught so many big bass on light tackle—a lightweight rod, reel, and line—that we lost count and returned to the dock exhausted. But in the last couple of years, unfortunately, it’s gotten harder to spot the fish. And on our most recent trip, we could hardly find any. I caught only one. 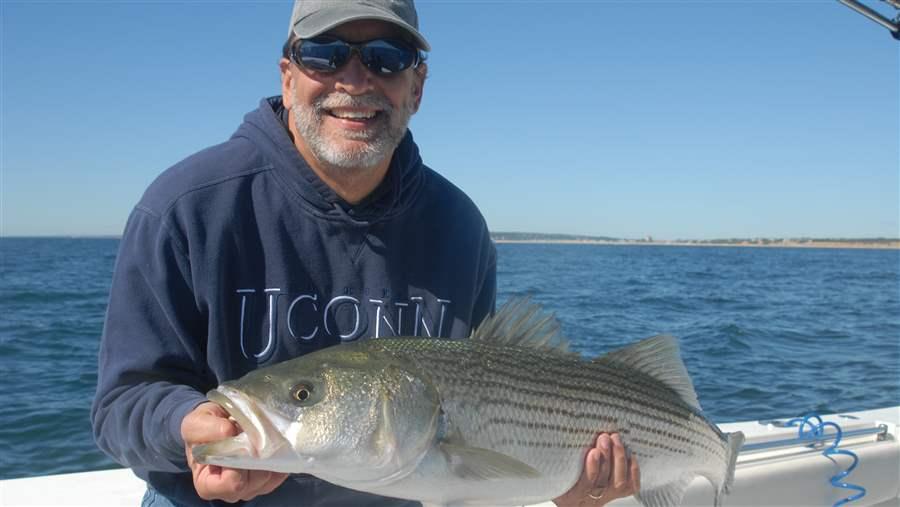 Lee Crockett poses with his catch—a 15-pound striped bass—before releasing it to swim another day.

This unsettling observation runs parallel to what scientists have found: Striped bass are declining. That’s particularly bad news because this species was once considered the success story for how an acutely depleted fish population could recover from years of overfishing. In the 1980s, the species was in such dire straits that regulators enacted a moratorium on its take along most of the East Coast. Fortunately, the fish rebounded, so that by the mid-1990s, anglers were celebrating a robust population and a return to fishing for a favorite catch.

But we have repeated our past mistakes. Since the mid-2000s, the total amount of striped bass taken exceeded the target catch level, and in six of those years, overfishing occurred—fishing faster than the species could reproduce. The result was predictable.

“There has been a really drastic decline,” McMurray told me on our most recent fishing trip. “Each year it’s gotten a little worse. It’s important to reduce fishing when a fish population gets smaller.” 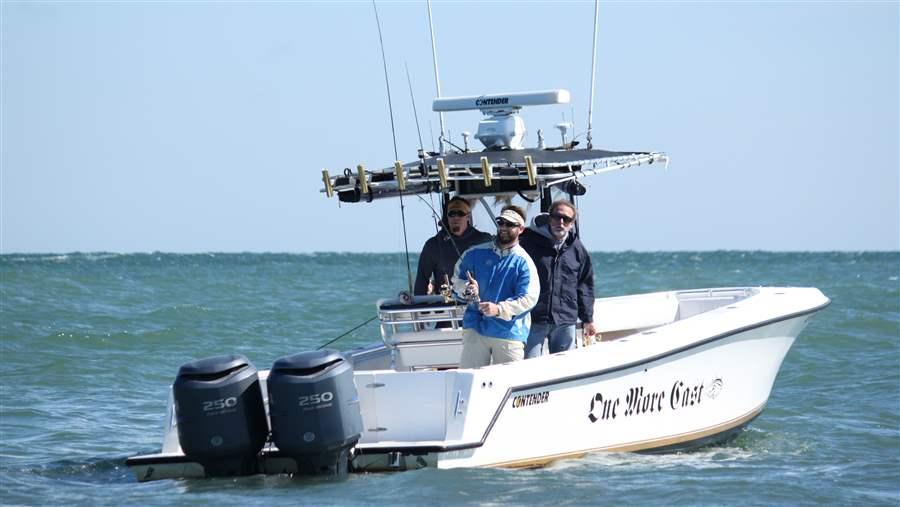 Regulating the health of fish populations can fall to more than one agency. Currently, the federal government manages recreationally and commercially important fish in federal waters (generally 3 to 200 miles offshore) under the nation’s fish law, the Magnuson-Stevens Fishery Conservation and Management Act. But in some regions of the country, state-run commissions play a separate role in fish management. These commissions, composed of fishermen, state agency representatives, and regional fishing experts, are authorized to oversee some fishing in state waters, which typically extend 3 miles offshore.

One such commission, the Atlantic States Marine Fisheries Commission, makes fishing rules, including those for striped bass, in state waters along the Eastern Seaboard. In October, after much debate and over opposition from several commission members, the full commission reduced the amount of striped bass that can be killed by 20 to 25 percent, depending upon the location. The commission should be commended, even though such cuts should have happened sooner to prevent the harmful overfishing that damaged the health of this fish population in the first place. It also remains to be seen whether the reductions will be effectively implemented, because the commission gave state fishery officials a good deal of flexibility in creating regulations.

The differences between some rules made by state commissions and those enacted by the federal government can be stark. This disparity is why I worry when some recreational fishing interests say they would like more fish species to be managed under a system similar to the state-operated one used for striped bass. Congress is likely to hear that request when it considers updating federal fishery law this year. The law rightly states that fishery managers must act to protect a species as soon as scientists recognize it’s in trouble and that there should be consequences for exceeding fishing quotas. Because regional commissions are not bound by the Magnuson-Stevens Act, their rules are typically more lenient.

In the case of striped bass, commissioners knew that catch amounts had exceeded target levels. But the commission’s rules didn’t require taking steps to prevent overfishing, so it delayed action for more than two years. In contrast, federal law would have required a faster response, potentially averting the population decline and the stiffer cuts in quotas that subsequently followed. 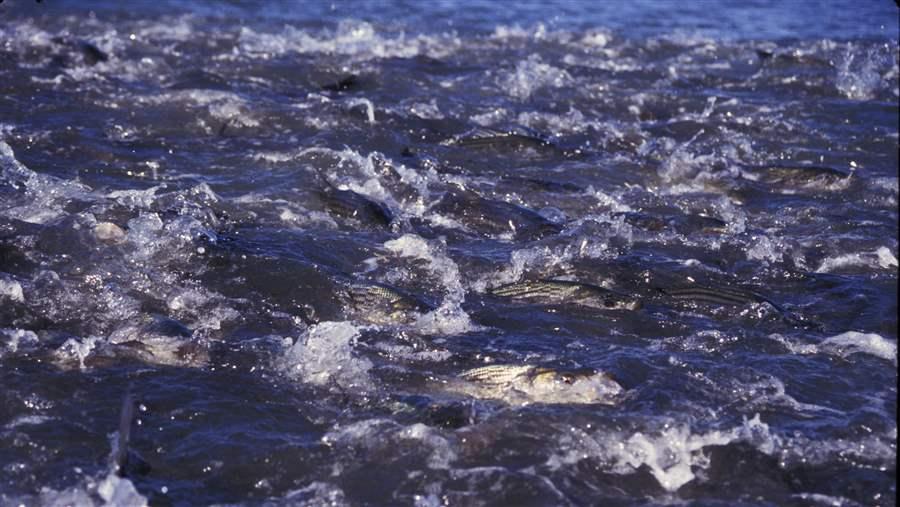 Thousands of striped bass come to the surface to feed on baitfish off Montauk—a sight less common now, because the striped bass population has declined.

“In the federal system, the law is the law,” McMurray said. “If overfishing occurs, we have to take prompt action.”

Even when commission rules are in place, states are not always required to follow them. The states that make up the Atlantic commission, for example, are legally bound by commission decisions. But in other commissions, individual states can ignore fishing limits that have been set.

This year, as Congress considers updates to the Magnuson-Stevens Act, I hope that members can see a lesson in striped bass. We need to continue to protect our valuable ocean fish under federal rules that have already helped dozens of depleted species start on the road to recovery.

There is no sense in deviating from that course now. Whether it’s striped bass, red snapper, or any other type of fish that anglers like to pursue, we must have rules that make fishing sustainable—or there won’t be enough fish left for us to catch.