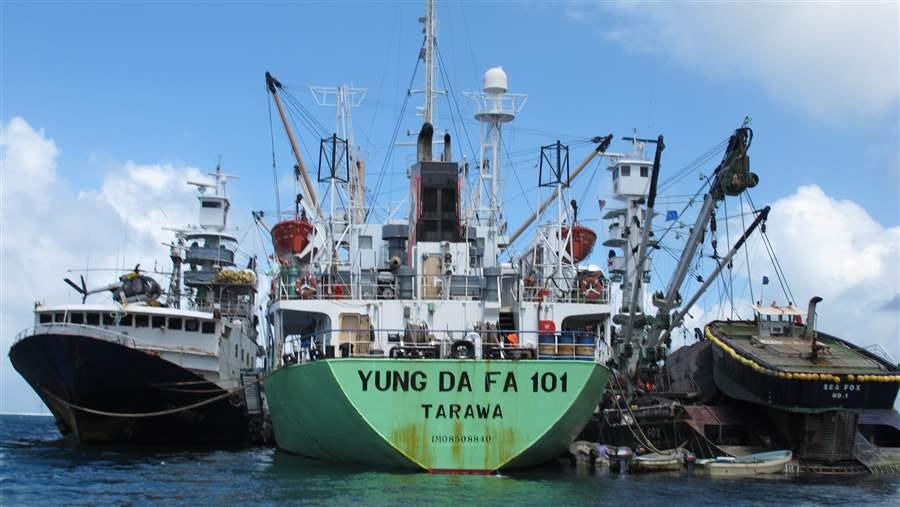 This month, I am taking part in Mission Blue II—an at-sea exploration led by Sylvia Earle, who won a TED Prize for her work to protect the world’s oceans. The voyage starts in Papua New Guinea and ends nearly 2,000 kilometers (more than 1,100 miles) to the east, in the Solomon Islands in the western Pacific Ocean. The route puts us right in the thick of tuna territory. The goal of the expedition is “to understand and help protect this region from specific threats,” and that immediately brings to mind the plight of bigeye tuna.

Commercial vessels in the Pacific have been overfishing bigeye for years, even as scientists warned of an inevitable decline. For more than a decade, fishery managers have implemented measures that turned out to be too weak to allow the population to recover. They have yet to put something stronger in place. So the population remains at 16 percent of its unfished size.

Pacific bigeye are top ocean predators and support several economically important fisheries. These tuna are caught at virtually every stage in their life cycle. Longline vessels target adult bigeye for the sushi market, while purse seine vessels catch juveniles when setting nets around schools of skipjack tuna destined for the canned market.

Though commercial fishing is a specific threat to Pacific bigeye, a series of common misconceptions are jeopardizing the species’ recovery. For example:

1. Because vessels caught more bigeye in 2014 than in the previous year, there must be something wrong with the science.

The science is actually pretty clear. The 2014 assessment, which was thoroughly reviewed, showed the Pacific bigeye stock being steadily depleted over the years. The population had dropped to a level that the Western and Central Pacific Fisheries Commission (WCPFC) agreed should be avoided. Still, to bolster that assessment, scientists conducted another analysis in 2015. The results confirmed that the earlier assessment was correct; the stock is as depleted as the authors had concluded.

So, while it is true that at least one longline fleet targeting bigeye caught its allotment quickly this year, catch rates are influenced by multiple factors, including oceanographic conditions, which change from year to year. These variable factors, then, do not necessarily indicate an improvement in the condition of the stock.

2. If given enough time to work, the current measures will end overfishing.

Another 2014 scientific analysis done for the WCPFC looked at the effects of current bigeye management to estimate the status of the species in 20 years. It assumed that all measures would be fully implemented. But that has not been the case to this point, and the entire effort to recover bigeye is lagging.

The scientists also used a number of “simplifying assumptions” because they cannot predict how certain countries—whose catches are not limited by WCPFC measures—will manage bigeye. But that means the analysis is not based on real-world conditions.

For example, the analysis assumed the amount of effort that purse seine vessels put into fishing would stay the same. That’s problematic because this effort has been gradually increasing over time. The analysis also assumed that minor longline harvesters of bigeye would maintain their catches at certain levels, but those catches have been increasing as well.

Purse seine vessels catch juvenile bigeye tuna when they use fish aggregating devices (FADs). These artificial floating objects are primarily used to catch skipjack but lure in young bigeye as well. The WCPFC now manages this method with a four-month fishery closure each year, during which vessels cannot use FADs. However, these closures so far have not been shown to be effective in reducing bigeye catch. The current closure is twice as long as the closure in effect in 2009. Still, more bigeye are being caught in the purse seine fishery, compared with six years ago. The 2014 analysis presumed there would be a fifth month added to the closure, but that still has not happened.

In addition to the problematic assumptions, the scientists who did the work reported to the WCPFC that it was impossible to actually predict future catches under current measures. The analysis says “there are a number of ‘either/or’ choices, exemptions or exclusions and decisions yet to be made with respect to some measures that make it impossible to predict outcomes in terms of actual future catch and effort levels.”

3. The existing measure can be tweaked through changes to FAD management without further limiting FAD use.

The only way to generate real reductions in bigeye mortality in the purse seine fishery is to mandate less fishing. That means limiting the number of times a vessel can fish with a FAD or instituting bigeye quotas for all purse seine vessels.

A small group of fishery managers say current measures need only slight tweaking, not significant alterations. Those adjustments include prohibiting vessels from deploying FADs during the runup to the closure and banning support vessels from doing the same, as well as setting new rules about when nets can be put in the water around fish during a FAD closure.

There may be good reasons for these technical changes, but some experts have examined them to determine if they would result in a real reduction in bigeye mortality. The answer has been a consistent “no.”

Governments still have a chance to ensure that bigeye make a real comeback. The first step is putting these misconceptions to rest.